If you’ve ever played Dungeon and Dragons role-playing games, or online PC games such as World of Warcraft and Diablo, you’ll be familiar with getting a debilitating item such as a cursed bracelet which lowers your gaming stats until you can get rid of it. But here’s a ral-life story of someone who was affected in real life by bracelet. A mother of two was branded mad, and sectioned under the UK Mental Health Act after toxins from a dodgy braceletshe bought for £1 on eBay, left her hallucinating, covered in hives, and with deteriorating mental health.  Ms Jo Wollacott, 40, also endured abscesses after wearing the Jequirity bean bracelet she bought online two years ago. 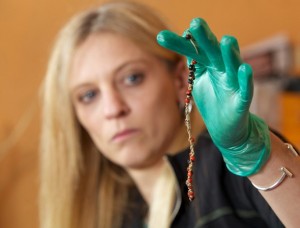 The artist from Bridport, Dorset said she initially thought she was just having a run of bad luck until she read warnings about the bracelets, which are made from toxic beans containing Abrin – a poison so dangerous that it is prohibited under the Terrorism Act!

What are Hives? What are Jequirity Beans? Let’s look at the facts:

Jequirity beans come from the plant Abrus precatorius, commonly known as the jequirity bean or rosary pea plant. This plant is a tropical vine primarily from south east Asia but has spread to subtropical areas. It is often cultivated as an ornamental plant. The plant produces a seed pod which contains several seeds (often called peas or beans) which are usually scarlet in colour with a black spot at one end and are approximately 3 mm by 8 mm in size. The seeds are often used in ornaments, necklaces, rosaries and in musical shakers (e.g. maracas).

“There have been no reported cases of poisonings from the bracelets but ingestion of any quantity of chewed, crushed or drilled (e.g. from a necklace) beans should be regarded seriously and anyone who is suspected of ingesting them should seek medical advice immediately.”

Hives: Urticaria (also known as hives, welts or nettle rash) is a raised, red, itchy rash that appears on the skin. The raised marks in the rash are called weals.  Each weal is short-lived, but the rash can move about. The rash normally disappears after a few days, but can sometimes last longer.

Jo, who was living with her partner and children, Shirelle, aged 22, and Dagan, seven, started noticing a change in her health shortly after the bracelets were delivered. 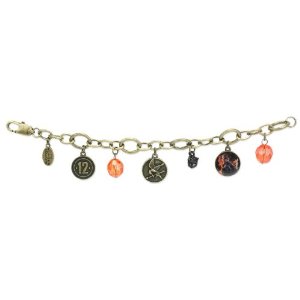 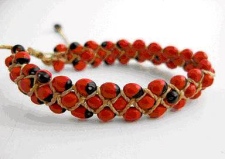 She said: “A few weeks later I had a really big abscess in my mouth. Then about one month after that I got hives all over my body. I was being physically sick throughout the summer – suffering diarrhoea and vomiting – but I just put it down to having a bad bug.”

Jo said her friends and family thought her life was ‘spiralling out of control’ because she was going through a stressful time, but, she now says it was down to the jewellery.

“Now I realise that my problems started when I bought this bracelet. When I found out hallucinations were part of the side effects of the poisoning I started to piece things together.”

She split up with her boyfriend in July 2010 and says the bracelet left her in an hallucinogenic-like state, resulting in her stopping her mosaic design business, and getting into debt, selling her family home and car.

Her mental health became so bad that she was sectioned  in 2010. She says: “I was in hospital for a few days with hallucinations – I did not know what was going on. Doctors could not work out what was wrong with me – they did not know what medication to put me on. They thought I had been on drugs, but all my tests were negative.”

It was only when her son Dagan bought a letter home from school in December 2011 warning of the dangers of the bracelets, that she realised she had slowly been poisoned.

She said: ‘The letter had a picture of my bracelet on. When I got the warning letter I came home and got the bracelet and realised how long I’d been wearing it for.

‘I couldn’t believe it. When I found out hallucinations were part of the side affects of the bead poisoning I started to piece things together. ‘My life is a lot better now and I am 99 per cent certain it is down to me not wearing the bracelet.’

Jo only wore one of the batch of red-and-black ‘love’ bracelets which she bought, and since hiding it away in a sealed box, she says her health has transformed.

Health officials say just three micrograms of Abrin can kill if it is swallowed.

It’s difficult to detect the beans because they are similar to other types of beans used in jewellery. But if you have a bean necklace or bracelet and you start feeling woozy, best to check it away, less you start developing the unpleasant symptoms expereinced by Jo.