The Science Of Physiognomy 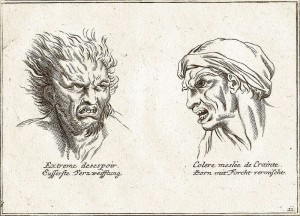 A study published in the Review Of Economics has come to the conclusion that ugly people are more likely to break the law. The BBC has described the findings as being significant in the field of anthropoetrics. But this is nothing new. Detecting someones criminal tendencies by their facial profile is a very old disclipline, this is known as physiognomy and is based on the thought that the face is the reflection of someones personality. That’s a scary thought but some would argue it’s obvious, although not always true. At some stage it was condemned as pseudoscience.
Physiognomy was particularily popular with the ancient Greeks, who formalised their beliefs, such as close-set eyes indicating that someone is untrustworthy, into the ‘science’ of physiognomy.
Not surprising this was abused and in Socrates’s trial, his facial features were cited as evidence of his brutal nature. In the 17th century Physiognomy was equally important as was palmistry. In fact, some scientists started to catalogue all possible facial conformations.
Curved eyebrows mean someone is friendly by nature; angled eyebrows signify someone who is always seeking to control. Everything means something.
In the 19th century Physiognomy was used to fight crime.
Murderers have prominent jaws, and pickpockets have scanty beards. A one-sided grin marks brutality, whereas poisoners have “a fawning smile”. This technique, developed by Professor Cesare Lombroso was widely used in Europe until the 1930s. Prosecuting lawyers could claim that a flattened nose was a scientific­ally proven sign of a thief, thus strengthening their case. His approach was nowhere near objective and his theories claimed that white people where superior. The same type of thinking led to the “final Solution” of the Nazis.

One thought on “The Science Of Physiognomy”