Are We All Connected On a Quantum Level? 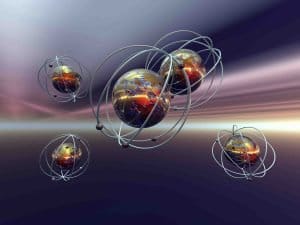 I have received an email from Song Chengxiang from Quantum Mindpower, suggesting we are all connected. Of course that is not a new theory, but he’s just attended a seminar and learned an interesting way how to proof the theory. I want to share this with you here:

Song Chengxiang says he was amazed by the result. He’s had a friend that he had not
seen for years, he knew where she worked, but never had a chance to meet her again. After he
learned this technique, he decided to try it out,and use it to find his friend. He wrote the
following sentence on a blank piece of paper. “IWILL MEET LUCY”. By the way, Lucy is not her real
name, I just use it here as an example. After writing down the words, he’s canceled any repeated
letters in the sentence. For example, there are 3 Ls in this sentence, so he canceled the other two, only
kept one. After doing this, he only had the letters “I W L M E T U C Y” The next thing is to use these capital letters to construct a drawing.
You can draw anything, he says the drawing does not have to make any sense, as long as it is made of these
letters. Then before he went to bed that night, he looked at the drawing, and held a picture of it
in his mind, and then I went to sleep. The next morning, he totally released it, threw away the
paper, and never thought about it again. This is because the subconscious mind needs trust, and
the more you trust it, the more it will work for you. He totally forgot about it, and let the
subconscious work on it. An amazing thing happened – one week later, he met his friend. He was
so surprised, this stuff works so well.

Don’t dismiss it, try it yourself. I will certainly do. It can only bring us one step closer to the truth, whether it works or doesn’t.

4 thoughts on “Are We All Connected On a Quantum Level?”