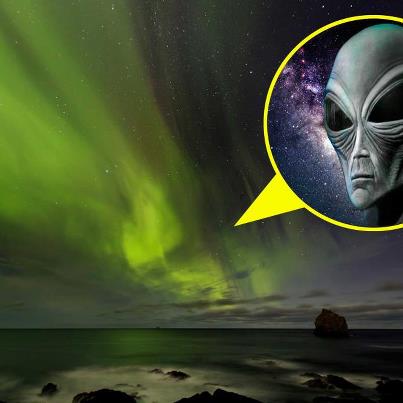 You may well have seen the worldwide press coverage of  Iurie Belegurshi’s alien face in the Aurora Borealis; the Northern Lights, earlier this autumn. The more detailed analysis/speculation continues as to what caused the phenomenon. 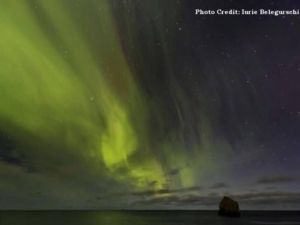 “I can’t describe with words what I feel when I see the Northern lights, but in my opinion it is the most amazing phenomenon we can witness. “I wish everybody could see it at least once in their life.

“I didn’t see the alien face during shooting, but when I came home I checked my photographs on the computer and I saw it! It’s unbelievable, I couldn’t believe my eyes.”

So was it just a fluke, a cosmically  induced accident? Some say not. Christians have jumped on the bandwagon to say that the image is not one of an alien, but of the fallen angel, Satan, glowering down on us from hell (I thought heaven was up and hell was down, but never mind!) They quote from the scriptures:

There will be signs in the sun, moon and stars. On the earth, nations will be in anguish and perplexity at the roaring and tossing of the sea. People will faint from terror, apprehensive of what is coming on the world, for the heavenly bodies will be shaken. At that time they will see the Son of Man coming in a cloud with power and great glory.

However UFO spotters say that this is not the first time that the Northern Lights have shown up alien activity- an alien craft was seen caught in the lights a few years back, while others say that if the lights were to be filmed constantly and from all angles, more of these alien images would be seen. 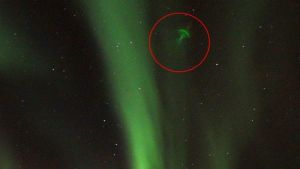 A Group of alienologists say that what the image represented was waves beamed from the alien planet many light years away, to their pioneers who are hidden here on earth. Where would you want to hide on earth and not be found? A place where there are few men or other creatures of any sort- the Poles.  While the aliens here try to remain hidden, there are clues as to their whereabouts and every now and then their signals beamed to their home planet are leaked and caught up in the natural beauty of the Northern Lights. It’s just a coincidence that we think of aliens as little green men, and the Northern Lights are green….

Whatever the truth, it sure makes a good story. Check out the images here: Auroral Alienalis