Do you have Murder Bumps on your Head? A Short History of Phrenology 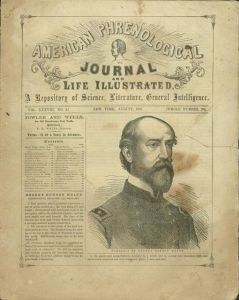 Phrenology (also known as Cranioscopy) is the study of the structure of the skull to determine a person’s character and mental capacity. It is different from anthropometry which is a study of facial features rather than the cranium.

Phrenology is based on the assumption (as yet unproved) that mental faculties are located in brain organs on the surface of the brain and that these can be detected by visible inspection of the skull that houses the brain.

This was originally proposed by a physician Franz Joseph Gall (1758-1828) from Vienna, who claimed there are up to 26 organs on the surface of the brain which affect the contour of the skull. He also said that one of the 26 was a murder organ present in murderers, and theft organs that encouraged theft. He postulated that brain organs which were used got bigger and those which were not used, shrunk, causing the skull to change shape with organ development. It is these bumps and indentations caused by the use or otherwise of the organs on the skull that determine a person’s emotional and intellectual functions.

Gall called the study of these cranial indentations and lumps cranioscopy, and his work was developed and extended by others, such as Johann Kaspar Spurzheim (1776-1832) who spread the word in America and George Combe (1788-1858) who founded the Edinburgh Phrenological Society.  In 1815 the work of Gall and Spurzheim was designated as “phrenology” (phrenos is the Greek for mind).

Phrenology was of course correct in assuming that the human brain is the seat of perception, character, intellect, and emotions and that different parts of the brain are responsible for different mental functions.  But the creation of cranial depressions and bumps through thought was not. In Gall’s time little was done to study the brains or the behaviour of persons known to have had neurological problems, which might have helped in the process of locating sections of the brain responsible for specific neurological functions. Instead, the mapping of the areas of the brain/cranium responsible for particular mental functions was quite arbitrary. Spurzheim rejected Gall’s theft and murder organs but he mapped out areas for benevolence, self-esteem, and even “conjugal love” (see diagram left). Note that destructiveness is just above the ear, and many people think that someone is lying if they scratch above their ear when talking! 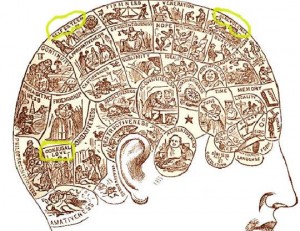 Although phrenology has little or no scientific base it still has its advocates. It remained popular, especially in the United States, throughout the 19th century and it spawned several other pseudosciences, including anthropometry. Phrenology was even supported by some scientists and inventors, including Thomas Edison. The Boston Medical Society warmly welcomed Spurzheim when he arrived in 1832 for an American Tour. The American Phrenological Journal and Life Illustrated, was published from 1838 to 1911. In Edinburgh, Combe’s Phrenological Journal was published from 1823 until 1847.

The early popularity of phrenology among scientists is curious, given the lack of evidence for a direct relationship between the brain and character. Bizarrely, empirical evidence was obtained for such a relationship in 1848 when a person named Phineas Gage’s moral character changed dramatically after an explosion blew a tamping iron through his head! Gage was leading a railroad construction crew near Cavendish, Vermont, when the accident occurred.  It is recorded that “Before the accident he had been a most capable and efficient foreman, one with a well-balanced mind, and who was looked on as a shrewd smart business man.” After the accident, he became “fitful, irreverent, and grossly profane, showing little deference for his fellows. He was also impatient and obstinate, yet capricious and vacillating, unable to settle on any of the plans he devised for future action.”

In the early 20th century interest continued; the most important British Phrenologist being the famous London psychiatrist Bernard Hollander (1864-1934) photo left.  His main works, The Mental Function of the Brain (1901) and Scientific Phrenology (1902) were claimed to be an objective appraisal of the teachings of Gall.

Phrenology continued to be very popular in the States, where automatic devices for phrenological analysis were devised.

In Belgium Paul Bouts (1900-1999) photo below, started working on Phrenology from a pedagogical perspective, using the Phrenological analysis to define an individual pedagogy. Combining Phrenology with typology and graphology, he coined a global approach called Psychognomy.

Phrenology “bumped along” during the mid 20th century, but came once again under attack because of the on-going development of psycho-analysis which adopts a subjective approach to analysis rather than the objective analysis of Phrenology.  Belief in phrenology still persists, so beware of being examined by one if you’ve just suffered a bump on the head! In the diagram on the left, note that there is a characteristic, 37D, suavity! 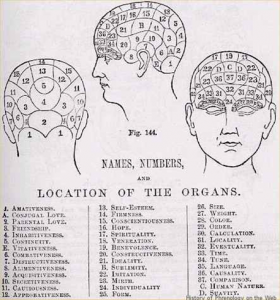 As a foot note there are a number of phrenological and anthropometrical references in 19th and 20th century literature. For example, Sir Arthur Conan Doyle.  When the villain, Moriarity, meets his adversary Sherlock Holmes for the first time, Moriarity’s immediate comment was “You have less frontal development that I should have expected.”

One thought on “Do you have Murder Bumps on your Head? A Short History of Phrenology”