Famous People who have Seen UFOs (Part One) 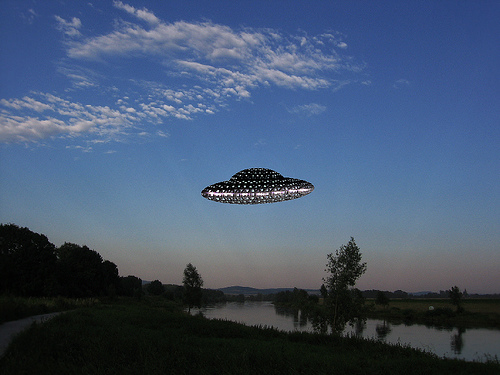 Whether you subscribe to the notion that we are not alone in the universe, and that since time immemorial we have been visited by extra-terrestrials, there are plenty of people who say they have seen the evidence in the form of UFOs.  We are not talking here abductions, anal-probe implants,  and being exhibited as curios on Rigel XI just witnesses to objects in the sky that cannot be explained. Here is a selection of the great and good (or maybe the just well-known) who have signed on the dotted line of the ledger entitled “I have seen an Unidentified Flying Object”.

Ex-Beatle, the late lamented John Lennon did not “Imagine” he saw a UFO- he recorded that he saw a flattened cone shaped disc with a brilliant red light. He yelled for his assistant May Pang to join him as the circular disc began to approach. It flew away but came back being the size of a small jet: Lennon and Pang stated that it had “a row or circle of white lights that ran around the entire rim of the craft.” This was a bright breezy afternoon. Seven others saw the craft too.

You can’t get more authoritative than a spaceman seeing a UFO can you?  NASA-trained, picked for their sober scientific minds and adherence to procedure and logic. But Buzz Aldrin, a member of the crew of Apollo 11 described a UFO encounter with the crew of Apollo 11 during its trip to the moon. Aldrin stated that Mike Collins could see this craft in his telescope and that it was revealed to be an L-shaped object when in close detail. Although the crew had a clear view of the UFO, they were wary of reporting this to Mission Control less they be thought to have been too long out in the midday moon.  Aldrin stated that: “we decided that after a while of watching it, it was time to go to sleep and not talk about it anymore. Discretion bested the better part of valour and the sighting was never officially acknowledged by NASA.

Next up, another American- this time a president no less. We are talking here of Jimmy “Peanut farmer” Carter who saw a UFO on the night of January 6 1969 in the state of Georgia. Jimmy Carter was waiting for a meeting to begin when he and ten other witnesses reported seeing a “red and green orb radiating in the western sky.” All of the witnesses reported that the object moved toward them from a distance, stopped, moved away and departed. Skeptics concluded that it was possibly a sighting of the planet Venus, but calculations revealed that Venus was only visible between 15 to 21 degrees above the horizon at 7:15 pm. Witnesses reported the “moon-sized object” to be at least 30 degrees above the horizon. It was a UFO.

Finally, a little earlier in history, step forward one Christopher Columbus. The date? October 11, 1492 the Atlantic Ocean. Christopher Columbus made his own personal discovery of a UFO on his first voyage of the Americas. Standing on the deck of the biggest of his three ships, the  Santa Maria, Columbus noticed lights glimmering in the nighttime sky. He quickly called to his mate Pedro Gutierrez to come and join him as he watched this strange glimmering light. As they watched “a light glimmering at a great distance” the light disappeared and reappeared several times throughout the night. This craft was observed as it moved up and down in “sudden and passing gleams.” 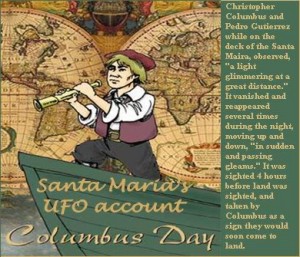 Had he been at the Rum or the over-fermented Limes? Who knows, but the man had his feet firmly planted in reality.