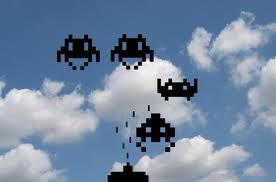 You may have heard the expression, or heard your kids using it- do you know what cloud gaming is and what it does?

Cloud gaming is also known  gaming on demand. It is a type of online gaming that allows direct and on-demand streaming of games onto a computer. It is comparable with video on demand. For those familiar with Office IT jargon, the programme of the game is provided by “thin client” means. That means the the actual game is stored on the operator’s or game company’s servers and is streamed directly to computers accessing the server through the client. This allows access to games without the need of a console and means that, to a certain extent, the capabilities and specifications of the gamer’s computer is irrelevant. The controls and key/button presses from the gamer are responded to at the server.

Where does the term cloud come from? That can be traced to Google’s Eric Schmidt referring to online data storage as a cloud. Bit fluffy eh?

While the cloud for gaming purposes started development in the early 2000s, it couldn’t get very far because of the slow broadband speeds and other technology issues, which are now being sorted. You probably weren’t aware but we have all used the cloud at some point. If you use emails to send videos or photos, Facebook or YouTube, then you will have been using cloud storage to upload, share and enjoy this data. In it’s most simple terms, the cloud is an online hard drive that can be accessed anywhere, at any time, and services such as Dropbox have utilized this extremely well. Here’s a simple illustration of what it does: 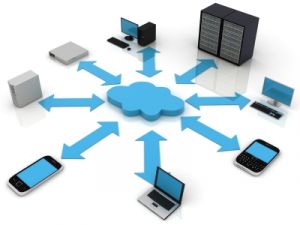 The massive PC gaming client, Steam, has been using a service called the Steam Cloud, which allows you to save all your PC games onto your allocated cloud hard drive on your account, so that you can continue your game wherever you are, and on any machine that has Steam installed. The easiest way to picture this is that all your Steam games are saved on a virtual USB stick you carried that around with you everywhere you went. If you happened to come across another machine that had the game you were playing on there. You would plug in your USB and load up your save. So the cloud is your virtual USB stick, virtual because it’s all online and there’s no need to carry it around. Also, because it is linked to your account, it is as secure as your account is.
Cloud storage and game saving has also been added to the Xbox 360 and linked to your gamertag too, so if you have one of those games you cannot wait to show your friend, but don’t fancy carrying your Xbox, or hard drive over to their place, just save to the cloud, log in to your gamertag at theirs and off you go!

So what this means is that you can buy the access to games that are installed on the cloud, with no need to use space on your own hard drive, and better still… no need for laborious PC specification sheets and upgrades, because these games are not running on your machine. They are running off the service providers very own cloud.  The latest updates and mods and patches are there each time you log on to the cloud. There are a number of companies now in the business, and currently the most popular company to do this is OnLive. Here it is being accessed from an iPad: 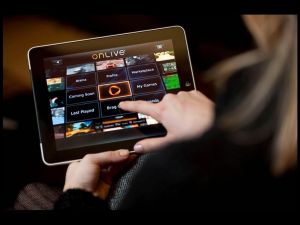 OnLive has it’s own dashboard, controllers and console units, however, all this unit is, is a video streaming device. The dashboard, the games, the entire service is streamed to you via a HD (720p currently, soon to be uprated) video to your TV, Mac, PC or Android device and just acts like any other console. Only difference is all the games are already there on the server, installed and ready to play upon purchase.

On PC, Mac and Android, you do not need the OnLive console or the OnLive controllers, you just need to download the app and use an Xbox 360 controller or other PC gamepad and OnLive will detect it! (Android uses Bluetooth controllers or on-screen buttons)

With Internet speeds getting faster almost every day, and the introduction of 4G to the UK reaching speeds up to 100mbps, mobile and portable gaming will be so much easier via the cloud! 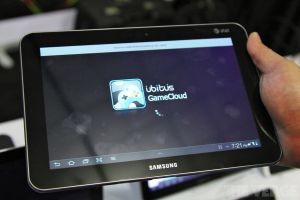 There are downsides rto Cliud ganing at the moment, although I don’t think they’ll be allowed to irritate for long.

The first and most major is lack of connection. If you are unfortunate enough to live outside of your local exchange, have no signal or just have poor Internet, you cannot become a cloud gamer. OnLive has a minimum speed of 2mbps, and that’s pretty poor. Even with 20mbps you can still get a few streaming errors.

Secondly, the cloud is not a physical storage device. All your data, your games, your saved games, are all in the hands of a remote server. If that goes down or your net goes down, everything is inaccessible.

All in all, the Cloud is a massive advance in today’s technology and I’m pretty sure will shape the future to come.Here are some of the people involved in it at present:

Just recently we have seen the launch of the NVIDIA GeForce GRID cloud gaming platform, which allows gaming-as-a-service providers to stream next-generation games to virtually any device, without the lag that hampers current offerings. With the GeForce GRID platform, gaming-as-a-service providers can deliver the most advanced visuals with lower latency, while incurring lower operating costs, particularly related to energy usage. Gamers benefit from the ability to play the latest, most sophisticated games on any connected device, including TVs, smartphones and tablets running iOS and Android. Also at GTC, NVIDIA and Gaikai demonstrated a virtual game console, consisting of an LG Cinema 3D Smart TV running a Gaikai application connected to a GeForce GRID GPU in a server 10 miles away. Instant, lag-free play was enabled on a highly complex PC game, with only an Ethernet cable and wireless USB game pad connected to the TV. That sounds too good to be true!

There are around 150 games already available for OnLive, ranging from new, high-profile titles such as Deus Ex: Human Revolution to entertaining novelties like Mini Ninjas. There’s also a strong catalogue of games from independent developers such as Amnesia: The Dark Descent and World of Goo.

There’s a lot more i could say but the cloud scene is changing almost daily as more service providers come forward, and those that are already there improve their services. Is cloud computing the end of having our own PCs, lap-tops etc? I doubt it.  Personal posession is still nine tenths of the law in my book… and I have a massive old style CD collection rather than all my music up there on Cloud Nine… 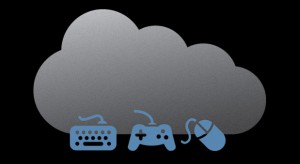