Is Voyager I Just an Embarrassing Poster for the 1970’s? 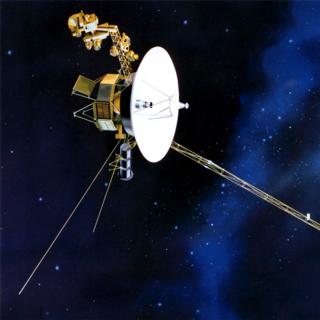 Some are heralding it as a greater achievement than man landing on the moon. Others as a snapshot of an era many people would like us to forget- the naff Seventies.

Launched in 1977,  the first Voyager was sent out into our solar system to study the outer planets, but then just kept on going. After taking some amazing snaps of storms on Jupiter and the rings of Saturn, the li’l metallic critter kept on going. Now the veteran Nasa mission is almost 19 billion km (12 billion miles) from home. It takes 17 hours now for a radio signal sent from Voyager to reach Earth.

One wonders what aliens would make of Voyager if they came across it, for two reasons: Firstly the technology, secondly our choice of cultural enrichment on board.  The craft’s technology was laughable by today’s standards: It carried an 8-track tape recorder and computers with 240,000 times less memory than a low-end i-phone. It had a record, but no record player.  It was launched from earth in 1977, the same year that the first Star Wars film was being screened. There is nothing physical that has travelled further  from earth:

…but would an alien species laugh at our primitiveness- like early man throwing a bone up into the skies (thank you 2001:A Space Odyssey) and find our species and our world juicy targets for assault?

Even if they weren’t particularly hostile to other species, the content on board could turn any alien from benign and sublime to a warlike state because of our  crimes against galactic culture.  There is a gold plated audio-visual disc on board that, apart from showing what science we knew in 1977, has some music and images. Including Jimmy Carter. How about the presence of a blues song from Blind Willie Johnson? That should cheer up our extra-terrestrial observers no end. Then there’s Chuck Berry’s Johnny B. Goode included, a vacuous tale of transient musical success by a plank-spanking hill-billy, topped off by some pretentious piece by Look-How-Clever-I-Am child prodigy Wolfgang Amadeus “Too Many Notes” Mozart.  Finally there’s some ambient nonsense comprising whale noises and the sound of the amazon rainforest at dawn… is that the sound of buzz-saws and helicopters? 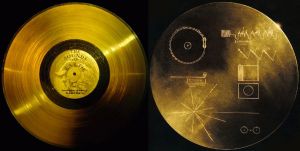 I am, of course, being catty and churlish. It could have been a lot worse. The next President of the USA was Ronald Reagan. And thank heavens we didn’t have VHS videos of appalling US and UK sitcoms to bung in the craft. Tom Sellick as Magnum, JR in Dallas, and early-mid period Dr Who with Jon Pertwee.

But it did get me to thinking.  If we could have sent a message out to the stars in earlier times, what would it have said about the condition of the human race? What message would be put on board: Imagine an austere protestant/pilgrim fathers 17th century craft sent from a joint UK/America project. Or something sent by the Nazis towards the end of the Second World War. Or even a probe sent by a chemically posioned war-torn community in the Middle East asking for help from beyond our Solar System…

But back to facts: Voyager has about another 10 years of its journey to nowhere to broadcast its signal. The power will then fail and it will then just continue on at the same speed and the same trajectory forever, or until it is picked up by an alien culture.  Let’s just hope they look at Voyager 1 as a professor emeritus may look at a crude child’s comic… and ignore it and us, and leave us to stumble on unhindered and unaided into the next chapter in our glorious civilisation. I wonder what we’d put on Voyager 3 when we send it from our colony in Mars in 2525? 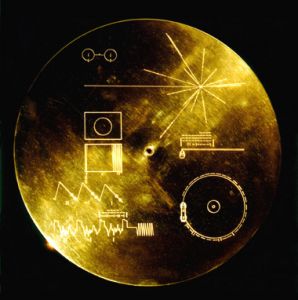