Just What Exactly Does The Large Hadron Collider Do? 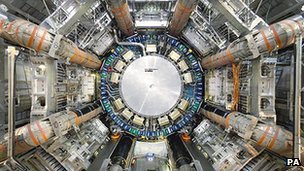 There you are with your friends hosting a dinner party. You joke and josh about sex, politics, religion- the usual easy-going trivial stuff. But then the frivolity and the opinionated, yet good-natured verbal cut and thrust dissipate. The mood gets dark,  as thick clouds of ignorance threaten to enshroud you.  Why?  Someone has asked the question you feared most: “Just what exactly does  that Large Hadron Collider do?” Do you make an excuse and rush to the toilet where you keep your yellowing Encyclopedia Britannia volumes? Do you send off a text message asking for help from your brainy scientist mate in Uni? Or do you clear your throat and then deliver a clear and concise answer while filling everyone’s wine glasses? 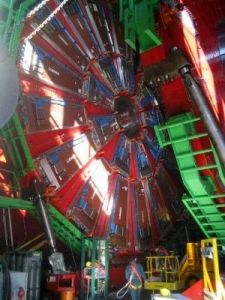 In a nutshell, the Large Hadron Collider, the most powerful physics experiment ever built, will try to re-create the conditions just after the Big Bang (which created everything) in an attempt to answer fundamental questions of science and the universe itself. It is situated underground in Switzerland and is larger than the M25, London’s orbital Mototway. 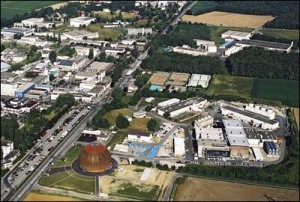 The Large Hadron Collider is the world’s largest and highest-energy particle accelerator. It was built by the European Organization for Nuclear Research (CERN) over a ten year period from 1998 to 2008, with the aim of allowing physicists to test the predictions of different theories of particle physics and high-energy physics, and particularly for the existence of the hypothesized Higgs boson particle. The LHC is expected to address some of the most fundamental questions of physics, advancing the understanding of the deepest laws of nature. It contains six detectors each designed for specific kinds of exploration.

The instruments used at CERN are particle accelerators and detectors. Accelerators boost beams of particles to high energies before they’re made to collide with each other or with stationary targets. Detectors observe and record the results of these collisions. From these results, scientists learn about a particle’s properties, such as mass and charge.

What is the Hoggs boson particle (known as “the God particle” and why is the thing called a Large Hadron Collider in the first place?

There are 17 known fundamental particles — six quarks, six leptons and five bosons (not counting the theoretical Higgs boson) — and their corresponding anti-particles. They are called ‘fundamental’ or ‘elementary’ particles because they have no smaller constituent parts. They are the eseence of everything around us. 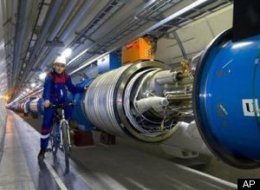 The quarks combine in various combinations to form other particles, such as protons and neutrons. Collectively, all the particles that are made up of quarks are called ‘hadrons’. The LHC collides protons, which are hadrons — that’s why it’s called the Large Hadron Collider.

We don’t know what causes the fundamental particles to have masses. There’s a theory that mass comes from the particles interacting with an (as yet unobserved) particle called the Higgs boson. The more they interact, the heavier they become, whereas particles that never interact are left with no mass at all.

The Higgs boson is named after physicist Peter Higgs. Its nickname is ‘the God particle’ but of course Higgs himself calls it “the particle named after me”. 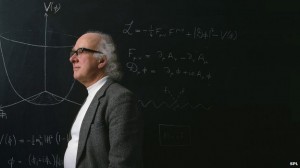 This is my favourite story about the LHC. A would-be saboteur was arrested in 2010 made the bizarre claim that he was from the future. Eloi Cole, an oddly attired young man, said that he had travelled back in time to prevent the LHC from destroying the world. He was attempting to disrupt by stopping supplies of mineral water to the experiment’s staff vending machines. 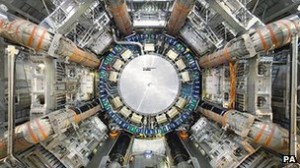 Mr Cole was seized by Swiss police after CERN security guards spotted him rooting around in bins. He explained that he was looking for fuel for his ‘time machine power unit’, a device that resembled a kitchen blender. Police said Mr Cole, who was wearing a bow tie and rather too much tweed for his age, would not reveal his country of origin. “Countries do not exist where I am from. The discovery of the Higgs boson led to limitless power, the elimination of poverty and Kit-Kats for everyone. It is a communist chocolate hellhole and I’m here to stop it ever happening.”

This isn’t the first time time-travel has been blamed for mishaps at the LHC. Last year, the Japanese physicist Masao Ninomiya and Danish string-theory pioneer Holger Bech Nielsen put forward the hypothesis that the Higgs boson was so “abhorrent” that it somehow caused a ripple in time that prevented its own discovery. 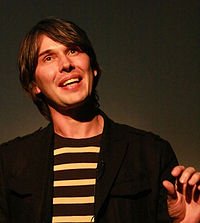 Mr Cole was taken to a secure mental health facility in Geneva but later disappeared from his cell. Police are baffled, but not that bothered. He has his own Facebook Fan Page.

In  December 2011 the Large Hadron Collider made its first clear observation of a new particle since opening in 2009… possibly justifying its huge cost!

One thought on “Just What Exactly Does The Large Hadron Collider Do?”