Mind over Matter: More Power to your Elbow! 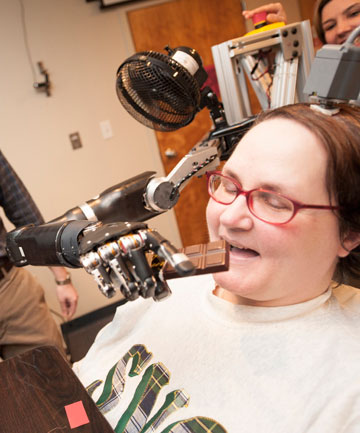 “It’s just a question of mind over matter!” How many times have we heard that expression when we are being exhorted to put aside practical and physical obstacles and use the power of positive thought to achieve our aims? A woman called Jan in the United States is astonishing doctors with just such a skill.  And, yes she does have a significant physical problem to overcome with her mind.  A few years ago Jan lost the use of her limbs due to a degenerative disease that affected her spinal cord and caused her to be paralysed from the neck down.

Dpctors at the University of Pittsburgh created a robotic arm for Jan, which she can now operate by using her thoughts- directions given to the arm from her brain. In addition to the robotic arm itself, a computer program was developed that translates natural brain activity to move real limbs, into ones that control the robot arm. It is very sophisticated- instead of Jan having to think “Move an inch to the left and close fingers” she merely has to think “pick up the ball on the table”. 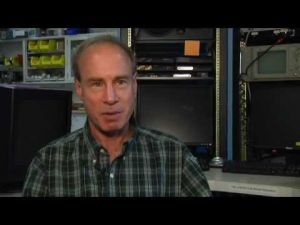 Andrew Schwartz, the Professor or neurobiology at Pittsburgh University said:

“We were blown away by how fast she was able to acquire her skill, that was completely unexpected. At the end of a good day, when she was making these beautiful movements, she was ecstatic.”

To make the connection between mind; Jan’s brain, and matter; the robotic arm, doctors performed a four-hour operation to implant two tiny grids of electrodes, measuring 4mm on each side, into Jan’s brain. The electrodes were pushed just under the surface of the brain, close to the neurons in the motor cortex that control hand and arm movement. Following this, the surgeons then replaced the part of the skull they had removed to expose and access the brain. Wires from the electrodes ran to connectors on the patient’s head. These were then connected to the computer system and tothe  robotic arm. Doctors then had to record Jan’s brain activity for arm movements. This entailed getting her to watch the robotic arm and imagine her own arm was moving in that way. These thoughts were then recorded by the computer as individual neuron activity from her brain.

“Once we understand which direction each neuron likes to fire in, we can look at a larger group of neurons and figure out what direction the patient is trying to move the arm in,” Schwartz said.

While the progress made has been truly amazing, Jan’s progressed has slowed recently. That is because  scar tissue that forms around the tips of the electrodes has reduced the quality of the brain signals to the computer and thus to the robotic arm. It is hoped that using much thinner electrodes will solve this problem. Once that has been achieved the next step will be to build senses into the robotic arm’s fingers, so as to transmit feelings of objects grasped back to the brain, such as heat, cold, and the nature of a surface touched- smooth, rough, whatever.  Beyond that it is hoped that a wireless system can be developed so that there doesn’t have to be a physical connection between patient, computer and arm.