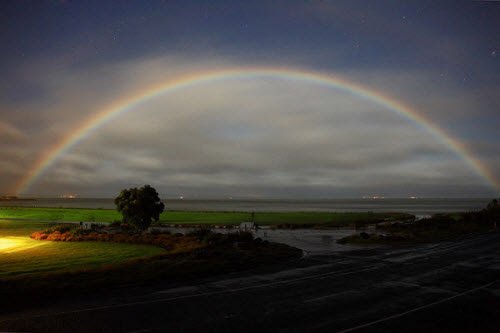 Rainbows are relatively common. From caveman depictions on their walls, through to biblical references following Noah and the Flood, and to the present day, there’s always going to be rainbows appearing somewhere in the world. During the day of course, because we all know they are caused by the refraction of sunlight through waterdroplets, rain or vapour, in the air. Not necessarily! 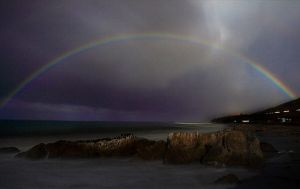 Although much more rare, rainbows can be seen by moonlight. These lunar rainbows or Moonbows follow a similar principle to refraction of the sun’s light. They are also known as White Rainbows, or Space Rainbows. Because the moon has no self-generated light, the light we see  on a full moon is the reflected light of the sun.  However moonbows are uncommon and even when they are present, are usually difficult to discern. This is because it is a much smaller amount of light reflected from the surface of the moon, than you get from the sun in daylight.  They  always appear in the opposite part of the sky from the moon. 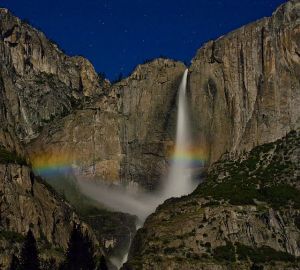 Why are they called white rainbows? Because the light is usually too faint to excite the cone color receptors in human eyes, and it is therefore difficult for the human eye to discern colors in a Moonbow. As a result, they often appear to be white.However, the colours in a Moonbow do appear in long exposure photographs, or in very unusual conditions.

This recent photograph was taken at night from the  The Devils Cataract section of the Victoria falls on the Zambezi river between Zimbabwe and Zambia: 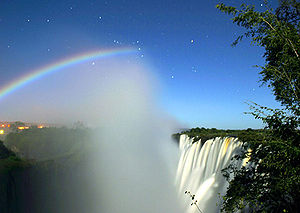 The Moonbow phenomenon was first explained in 250BC in Aristotle’s work Meteorology.

Moonbows are most easily viewed when the moon is near to full (when it is brightest). Moonbows are divided into three types: “True” Moonbows, non-true  Moonbows, and faux moonbows (which are not moonbows at all).  True moonbows are those produced like daytime rainbows, from the interaction of sun and rain.  Other Moonbows are those produced by waterfalls or sprays.  For true moonbows, the moon must be low in the sky (less than 42 degrees and preferably lower) and the sky must be dark. And, of course, there must be rain falling opposite the moon. This combination of requirements makes moonbows much more rare than rainbows produced by the sun. The third type, the Faux Rainbow, is a coloured circle around the moon—it is a halo produced by refraction through hexagonal ice crystals in cirrus cloud. These coloured rings close to the moon are called a corona.

For camera buffs there are a number of sites on the ‘net where you can find out the best locations to shoot Moonbows, and the types of settings you should have on your camera. Unlikely to get shots such as these with your handheld phone camera… 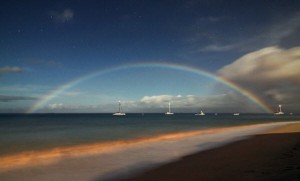 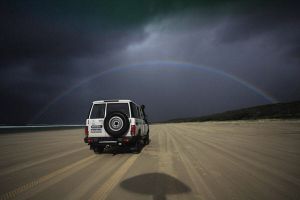