More Power to Your Elbow! 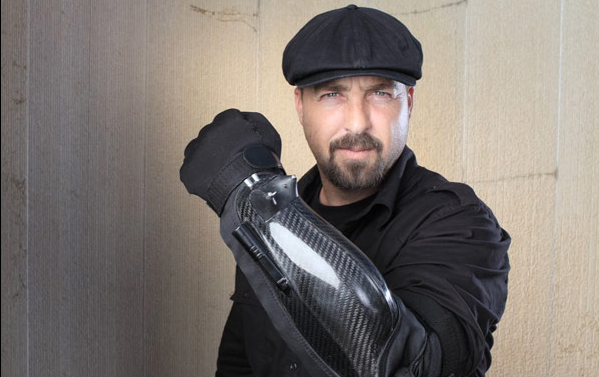 So there you are on the platform waiting for your train. A few other people are playing games their mobile handsets, or speaking to someone on them. Your phone rings, you shrug off your black leather full-length Matrix-like coat to answer your phone… And with a flourish of your arm, and to the gasps of fellow travellers, you reveal your rather impressive and OTT phone holder accessory and utility, the Armstar’s BodyGuard 9XI-HD01 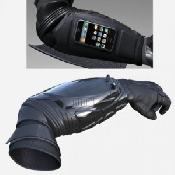 It is made from cotton, Kevlar, as well as Nomex, a flame resistant fibre. It is made with a slot for housing your iPhone, and it is also made for charging your iPhone as well. Other features on this gauntlet include a 720p video camera, a flashlight, and a rechargeable Li-Ion battery pack for recharging other electronic devices. Oh. Did I mention  a 300,000-volt arc device for stunning people? I kid you not. This is an anti-mugger’s dream. In the blurb for the gizmo, it’s described as a “non-lethal arc taser”.

The glove is activated by pulling out a grenade-like pin and palming an embedded finger pad. The Armstar BodyGuard 9XI-HD01 sparks a loud and visible arc of electricity between its wrist-mounted taser spikes, a sight that inventor David Brown hopes will encourage would-be crooks to surrender.

The ArmStar BodyGuard isn’t meant to be a superhero iPhone accessory, but an idea of inventor Dave Brown who created this “in response to a string of mountain lion attacks near his Southern California home.  But I can see problems trying to board a plane with the arm on. “it’s just a plain old mobile phone holder” isn’t going to wash with airport security is it? 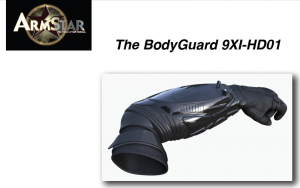 The arm can be bought in numbers of ten or more by contacting the manufacturers, Armstar, directly, but the price is yet to be disclosed publically.  The gauntlet’s hard plastic shell is even roomy enough to add GPS equipment, biometrics chemical sensors, or other embedded additions, as needed. The first batch of pre-production superhero gloves will hit the streets of LA later this year for testing and evaluation.

My guess is this is going to end up being used by club bouncers, as an accessory in low-budget sci-fi films, or by techno dance troupes, rather than something that will be commonplace on the streets of LA, New York or London.  And I think the stun feature is likely to be disabled before any importer in the UK will touch them. Which is a sort of pity. It does look kind of cool, and also would make a would-be robber think twice about trying it on with you. But then again if you accidentally set off the stun as you grab something metal…. To much power to your elbow!