One Way Trip To Mars Anyone? 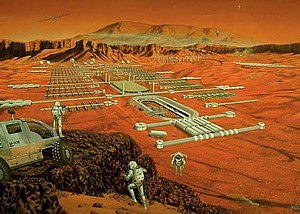 Travel to Mars? Then stay there till you die? Personally, I’d prefer to stay at home put my feet up and watch the excellent John Carpenter film “Ghosts of Mars”. But many thousands of people think differently and have paid an application fee to be considered to join Mars One, the  $6-billion project that plans to establish a permanent human colony on Mars in twelve years time. 165,000 people have applied, from more than 140 countries.  And nearly 5% of those applying are Canadians. Is  life really that boring in Toronto, Vancouver and Winnipeg? 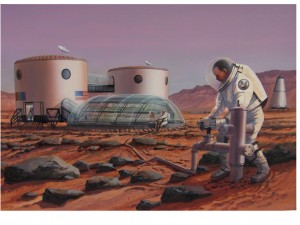 Mars One was conceived by Dutch Entrepreneur Bas Landlorp. The plan is for a first group to establish the colony in 2025 with just four settlers. Then additional groups would travel mout every couple of years. But even if the thought of living out the rest of your life in a tank on an airless planet doesn’t worry you, there are pther significant risks. Such as a launch disaster, a component malfunction during the journey,  a disaster at touch-down, or problems with the air conditioning.

Many of those applying are doing it for altruistic reasons, such as the furtherance of mankind, and the development of space travel and planet colonisation. There are also those who want to plant the flag of their particular country or be the first to pray to their God on Mars and so bring glory and recognition. Then there are others who will fall at the first hurdle when trying to establish the sanity of applicants. For example one applicant known only as Collin, 26, from Canada chose to submit a full video poem, which included these verses:

“I am a scientist, adventurer, wizard and explorer/Philosopher, technician and confidant ninja warrior/My brain is sane enough to sustain itself on such a lengthy trip/I will bond in trust and faith with fellow astronauts on the ship.”

Another applicant is convinced that the sun will consume the earth and so wants to be well away from here when that happens. But someone ought to tell him that that’s not due for another 100,000 years. 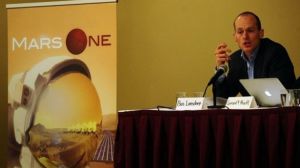 Landlorp was hoping for a million applicants, so the project has already hit some problems- the deadline is now closed. The next step is the whittling of 165,000 down to four. It’s likely that an X-Factor type TV show will be the vehicle to select the winners and also provide revenue to buy the gas for the trip.