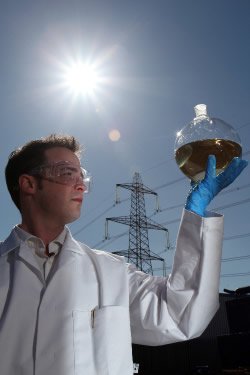 The possibility of producing synthetic petrol using only air and electricity has been thought of and discussed for some years, but the sceptics said it could never be achieved.  File under Star Trek’s Ion Drive, Flying Wings for Humans, and immortality.

But now a small Stockton-On-Tees  British firm, AFS- Air Fuel Synthesis,  has become the first in the world to demonstrate CO2 air capture technology as a viable industrial project, with huge repercussions for the future. 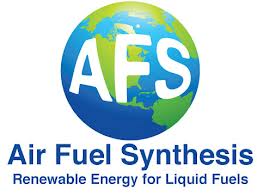 The synthetic fuel created can be used in any regular petrol tank. And a big plus is that if renewable energy (eg from wind or solar power) is used to produce the electricity, the process and end product are carbon neutral.

How does it work? The process involves air being blown into a tower containing sodium hydroxide which reacts with carbon dioxide in the air, forming sodium carbonate. Electricity is then used to release the carbon dioxide, which is stored. With me so far?  A dehumidifier is then used to condense water. The water (H2O as every school person knows) is split into its constituent H-Hydrogen and O-Oxygen components. The hydrogen is reacted with the carbon dioxide to create “Syngas”. This is processed to form methanol which is subsequently turned into petrol. The resultant synthetic petrol can be used as replacement fuel for existing vehicles or can be used to store intermittent energy from renewable sources, such as wind and solar power, when it might otherwise be wasted.

“We are now ready to build the first commercial Air Fuel Synthesis production plant making carbon-neutral petrol. The technology can add to new or existing renewable energy projects, especially where the energy is stranded; where there is a premium for secure liquid fuels for existing vehicles; or for reducing carbon emissions. Demand for specialist high quality low-carbon fuels in motorsports offers a particularly attractive early niche market for investors.”

The Institute of Mechanical Engineers; IME, are impressed. Their  head of energy and environment Dr Tim Fox said the technology had the potential to become “a game-changer”. 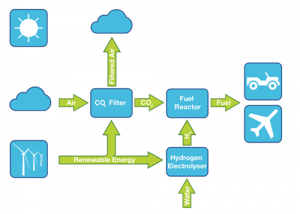 As far as keeping things green is going, this petrol from air process effectively recycles CO2 and the synthetic petrol avoids and further transport emissions. Being able to capture carbon dioxide from the air, and effectively remove the principal industrial greenhouse gas resulting from the burning of fossil fuels such as oil and coal, has been the holy grail for many years. Perhaps we’ve discovered it: Watch an explanation of the technology by Air Fuel Synthesis Chief Executive Peter Harrison here: Petrol from Air 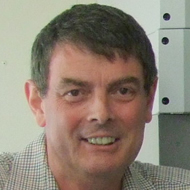 The company hopes that within two years it will build a larger, commercial-scale plant capable of producing a ton of petrol a day. It also plans to produce green aviation fuel to make airline travel more carbon-neutral. Now that would make people sit up and take notice. The fact that the synthetic fuel can be used in existing engines makes ir very attractive.

But surely we’ve heard all of these wonder technologies before? The anti-gravity machine, the hovercar, the petrol from air… However.  Tim Fox, head of energy and the environment at the Institution of Mechanical Engineers in London, said:

“It sounds too good to be true, but it is true. They are doing it and I’ve been up there myself and seen it. The innovation is that they have made it happen as a process. It’s a small pilot plant capturing air and extracting CO2 from it based on well known principles. It uses well-known and well-established components but what is exciting is that they have put the whole thing together and shown that it can work.”

Although the process is still in the early developmental stages and needs to take electricity from the national grid to work, the company believes it will eventually be possible to use power from renewable sources such as wind farms or tidal barrages.

Possibly as exciting as the invention itself, is how it may transform the fortunes of the UK economy. A refinery could be built within the next 15 years and the UK should be in a good place to be able to set up and establish all the manufacturing processes that this technology requires. Just imagine what effect being able to produce your own green energy fuel would do to an economy. The initial plan is to produce petrol that can be blended with conventional fuel, which would suit the high-performance fuels needed in motor sports. The technology is also ideal for remote communities that have abundant sources of renewable electricity, such solar energy, wind turbines or wave energy, but insufficient or inadequate storage capacity.

Before we run away with ourselves, the process is to inefficient and expensive at present to be commercially viable in large-scale operations. However carbon capture technology will be refines and improved, and it has always been seen that the initial high cost of energy production from a new technology, comes down in price sooner or later.  How much is a portable MP3 player these days compared to when they first came on the market?

The fact that the process has been shown to work means that we are off of the starting blocks- this could be the perfect compliment to wind and other renewable energies, and drastically reduce our pollution from carbon.

One thought on “Petrol from Air!”