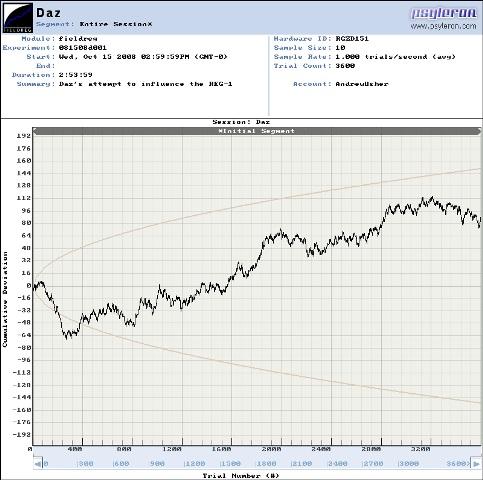 The small box, no larger then 2 cigarette boxes, produces a constant stream of random numbers limited to ones and zeros. All the time. This is the random event generator and is part of the Global Consciousness Project. Global Consciousness because it is supposed to find out whether or not we are all connected. It may also alow us to peek into the future.

Apparently, the machine sensed the September 11 attacks on the World Trade Centre four hours before they happened – but in the fevered mood of conspiracy theories of the time, the claims were swiftly knocked back by sceptics. But lin 2004,  it also appeared to forewarn of the Asian tsunami just before the deep sea earthquake that precipitated the epic tragedy.

75 respected scientists from 41 nations are monitoring the experiment. However, the scientists are still debating what they are actually finding. Some talk of the discovery of the superconscious mind or thye cosmic mind, others say that it allows us to see the future.

The project is also the most rigorous and longest-running investigation ever into the potential powers of the paranormal.

In the early 90’s there were 40 random number generators connected from all over the world running constantly. The computer in his office receives the data and calculates a curve. If the numbers are normal, i.e. random a mere flatline shows. In 1997 the first event caused the flat line to shoot upwards. It was the day a billion people around the world watched the funeral of Princess Diana.

After the event the scientists connected a total of 65 random Event Generators and called it The Global Consciousness Project. 41 countries participate in the event.

After several other events, the machines went out of sync to the extreme on September 11, 2001.

Not only had they registered the attacks as they actually happened, but the characteristic shift in the pattern of numbers had begun four hours before the two planes even hit the Twin Towers.