Supermoon Tonight! (But will we see it throught the clouds?) 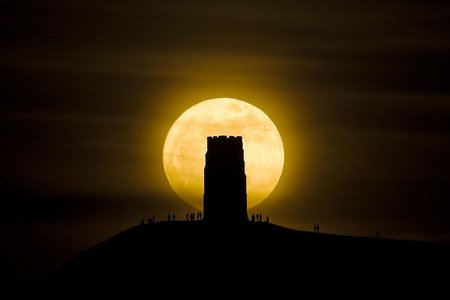 This Sunday evening, 6 May,  if the clouds clear, we in the UK and most of Europe will be treated to a Supermoon in the sky. What is a Supermoon? It’s our familiar lunar satellite, the moon, but will be the largest full moon of the year. There are a number of full moons every year of course, but this evening the moon will be the closest it gets to the earth. It therefore appear larger (14%) and brighter (30%) than a normal Full Moon. It’s called a Perigee Full Moon (the opposite being an Apogee Full Moon). 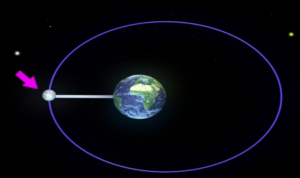 But while it may be nice to see, it may also bring unplesasant effects: The moon’s gravitational pull on the earth pulls cast quantities of water about through the tides. With a Supermoon, these effects will be at level Max, causing King Tides and Surges- not good at a time when parts of the UK have already been subjected to flooding.

But it’s the direct effect on living creatures that some say will be a problem. Wolves baying at a Full Moon are well known and documented, but the immense gravitational pull exerted by the moon, sufficient to displace trillions of gallons of water might have an effect on the human brain. Our ancient and medieval ancestors thought this (hence the words lunacy and lunatic, from “Lunar” meaning moon) and took precautions, such as not going outdoors on the night of a full moon, and only looking at the moon in reflection, not directly, lest you be struck insane. 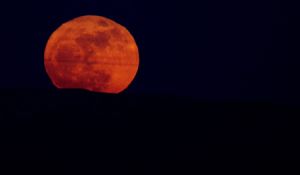 The moon, seen from Terminal 3 of Manchester Airport, rises from behind the hills of the Peak District. March 2011

In the US, it’s documented that more violent crimes are committed when the moon is full. But does it really affect the human brain? There is certainly colloquial evidence to point to more erratic behaviour being reported at pergii full moons, but we must remember the  “confirmation bias” phenomena, where we select pieces of, so called, evidence and take them on board and ignore evidence to the contrary. In common language, we see what we want to see! However anyone interested in astrology, as oposed to astronomy, will probably tell you different.

Last year’s Supermoon appeared on the eveing of 19 March 2011, and was pretty spectacular, looming over London and glowing a deep, dark orange, looking definitely a bit mean! Maybe if you take any photos of tonight’s Supermoon, you can put links to them here and share your experience of it. 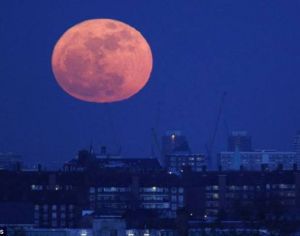 Me? I won’t be looking at it. I’m afraid it’s the straightjacket and shackles for me this evening, less I get that lupine urge to go a-hunting!