Now, I swear by the sun god Utu on this very day — and my younger brothers shall be witness of it in foreign lands where the sons of Sumer are not known, where people do not have the use of paved roads, where they have no access to the written word — that I, the firstborn son, am a fashioner of words, a composer of songs, a composer of words, and that they will recite my songs as heavenly writings, and that they will bow down before my words……
King Shulgi (c. 2100 BC) on the future of Sumerian literature. 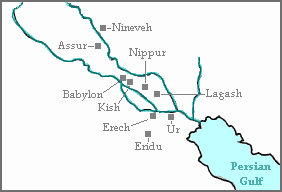 Sumerian history is reckoned to begin around the 5th millennium BC when a people known as the Ubaidians established settlements in the region known later as Sumer. These settlements gradually developed into cities, and became the principal Sumerian cities of Adab, Eridu, Isin, Kish, Kullab, Lagash, Larsa, Nippur, and Ur. By 3250 BC, another people came to the cities and began to intermarry with the native population. These newcomers were known as Sumerians. Interestingly no-one can be sure exactly where they came from, but they were believed to have migrated from northeast of Mesopotamia.
In the centuries that followed the immigration of the Sumerians, the country grew rich and powerful. Art and architecture, crafts, and religious and ethical thought flourished. 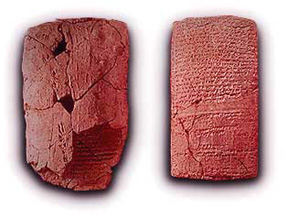 The Sumerian language became the prevailing speech of the land, and the people here developed the cuneiform script, a system of writing on clay. This script was to become the basic means of written communication throughout the Middle East for about 2000 years.
But by the the 23rd century BC the power of the Sumerians had declined to such an extent that they could no longer defend themselves against foreign invasion. The cause of this was the endemic problem that besets most great civilizations- internal disputes, greed and internecine power struggles. So weak had the country become that the Semitic ruler Sargon the Great (reigned about 2335-2279 BC) succeeded in conquering the entire country. Sargon founded a new capital, called Agade, in the far north of Sumer and made it the richest and most powerful city in the then known world. The people of northern Sumer and the conquering invaders eventually interbred and the people became known as Akkadians. The land of Sumer acquired the composite name Sumer and Akkad.
This young civilization was not to flourish however, and another race of people, the Elamites (from modern day Iran), attacked around 2004 BC conquering the principal city of Ur. It was sacked and burned, but later rebuilt by the Babylonians. During the next centuries further bitter intercity struggles for the control of Sumer and Akkad occurred, until Hammurabi of Babylon became the sole ruler of Sumer and Akkad around 1763 BC. This date probably marks the end of the Sumerian state. Sumerian civilization, however, was adopted almost in its entirety by Babylon. Despite the fact that the Sumerians completely disappeared as a people, their language lived on as the language of culture while their writing, their business organization, their scientific knowledge, and their mythology and law were spread westward by the Babylonians and Assyrians.
The legacy of the Sumerians is significant. For example they were advanced business administrators and used a system of counting based on the unit 60 – the sexagismal system rather than the decimal system which is based on the unit 10. Of course the sexagismal system is still used today in computing divisions of time (60 seconds to a minute, 60 minutes to an hour) and angles (divisions of 360; 60×60). They also created a lunar calendar and a day of 24 hours and a week of seven days.
The Sumerian cuneiform writing is thought to have inspired Egyptians to create their own script, and spread to be used by the later Persian empire, while the technical inventions of the potter’s wheel and the wheeled cart appear to have emerged from Sumerian civilization. 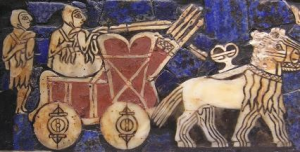 In the arts, the Sumerians created a rich legacy of literature, three of which deal with the story of the creation, an epic of the flood (very similar in many ways the Biblical story of Noah), and the Epic poem of Gilgamesh. Gilgamesh, two-thirds god and one-third man, is the classic hero of Mesopotamian literature, a majestic powerful figure pressing the gods in vain for the secret of immortality.
Finally their sculpture and architecture was well-developed, with their strikingly impressive temples (or Ziggurats) dominating the landscape. 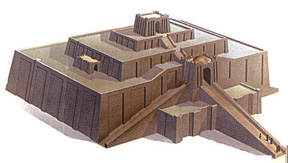 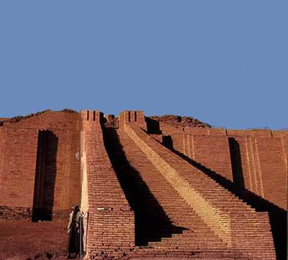