The Ancient Sumerians: Part 2- The Anunnaki and the Extra-Terrestrial Connection 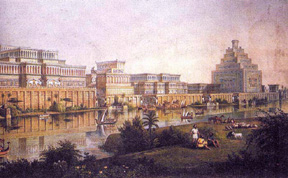 The rise of the Sumerian civilization from obscurity to enlightenment is phenomenal. There was no trial and error, or evidence of a slowly evolving civilization. The Sumerian civilization almost sprung into existence overnight. In the space of a relatively small window of time, the leaps and bounds in technological, artistic, spiritual and architectural achievements are breath-taking. What was the trigger for this? A particularly bright leader or visionary? No evidence. An influencing from another neighbouring regional culture that was more advanced? No. There would have been evidence of that culture’s legacy unearthed. But perhaps an influencing from a more distant culture is feasible? An extra-terrestrial one?
The Anunnaki are the Sumerians’ Lords, or Gods. The name as appearing in cuneiform can be roughly translated as “Those who from the heavens came down.” A relief carving of one of the Anunnaki is below. 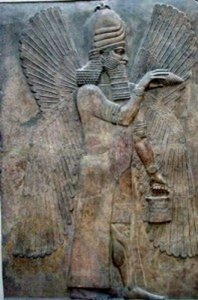 There are very few people who are able to translate the cuneiform writing of the Sumerians. The best known is probably Zecharia Sitchin. The great controversy surrounding his work is not his translations of the Sumerian texts but his interpretation of them. Sitchin views the words as being literal. Where the translation is that a God visited a temple, he interprets it that a god-like being did indeed fetch up at the temple! He rejects that the Sumerians were talking metaphorically in their texts.
Could the Anunnaki have been aliens who came to earth and gave the Sumerians their huge kick-start along the road to civilization?  Consider this- the Sumerians said that Earth was the seventh planet. Their Gods referred to it as the seventh planet in towards the sun with Pluto being the first, Uranus the second, Neptune the third etc.  That of course is correct, with only Venus and Mercury closer to the sun, making up the nine planets we know of today (ok… eight if you agree that Pluto is now regarded as an asteroid, not a planet). 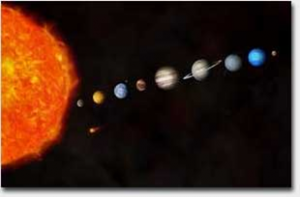 How did these ancient people know of these outer planets without the aid of telescopes? Perhaps the Anunnaki taught them?

Another hugely advanced concept that appears in Sumerian writing is that the Earth and its moon were created from the collision between two planets. In the June 2000 edition of the magazine of the International Space Science Institute, Spatium, this stellar event was given credibility. Returning to the texts, the collision was said to have occurred because of a gravitational type disturbance caused by the passage of the Anunnaki planet, Nibiru, or Planet X, when captured by the sun’s gravitational pull. 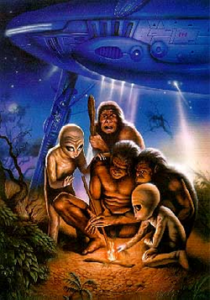 According to the free-form translations of Sumerian texts, the purpose of the Anunnaki visit to earth was to obtain gold, needed for the repair of the atmosphere of Nibiru. The mining was originally undertaken by the aliens themselves, but their scientists created a worker class of beings by combining DNA with the primitive indigenous species on earth, homo erectus, creating the first homo sapiens- us! 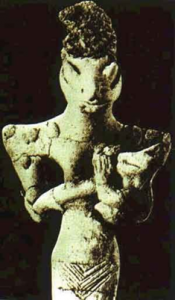 Sumerian carving of a God

After creating the Sumerian civilization the Anunnaki were said to have returned to their home planet. A complete orbit around the sun of their planet Nibiru takes 3600 years. The time when the planet will return into our solar system is nearing. What may be the gravitational effects on earth this time and will the Anunnaki visit us again?
But is Nibiru real? The rumour is that an approaching planetary body was identified in 1983, by NASA’s Infrared Astronomical Satellite (IRAS). This was reported in the Washington Post. Unofficially a US intelligence officer said that the IRAS scans detected a very large object in the solar system.
A technologically superior telescope, the South Pole Telescope (SPT) has been built in the Antarctic to view the skies. It has already been dubbed in some quarters, the Planet X tracker.
So, if there is a planet approaching, and if it is the planet of the Anunnaki, what will happen? Will there be another benign intervention which will allow our planet to develop further, perhaps learning the secrets of deep space travel, or a new total renewable energy source? Or will they be disappointed with our lack of progress, and petty inter-state rivalry that brought down the Sumerian civilization? Watch the skies! 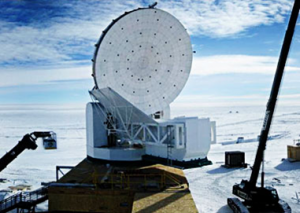 2 thoughts on “The Ancient Sumerians: Part 2- The Anunnaki and the Extra-Terrestrial Connection”