Stephen Hawking Says That God Did Not Create The Universe, But Who or What Did…?

Stephen Hawking says that the Big Bang was a result of the law of physics rather then an act of God.

The scientist claimes that there was no need for God to explain why the Universe was formed.

In his latest book, The Grand Design

, an extract of which is published in Eureka magazine in The Times, Hawking said: “Because there is a law such as gravity, the Universe can and will create itself from nothing. Spontaneous creation is the reason there is something rather than nothing, why the Universe exists, why we exist.”

How long can the Higgs boson keep hiding?He added: “It is not necessary to invoke God to light the blue touch paper and set the Universe going.”

In his most famous publication,  A Brief History of Time: From the Big Bang to Black Holes

, Professor Hawking did not dismiss the possibility that God had a hand in the creation of the world.

He wrote in the 1988 book: “If we discover a complete theory, it would be the ultimate triumph of human reason — for then we should know the mind of God.”

In his new book he rejects Sir Isaac Newton’s theory that the Universe did not spontaneously begin to form but was set in motion by God.

In June this year Prof Hawking told a Channel 4 series that he didn’t believe that a “personal” God existed. He told Genius of Britain: “The question is: is the way the universe began chosen by God for reasons we can’t understand, or was it determined by a law of science? I believe the second. If you like, you can call the laws of science ‘God’, but it wouldn’t be a personal God that you could meet, and ask questions.”

The book, co-written by American physicist Leonard Mlodinow, is published on September 9. 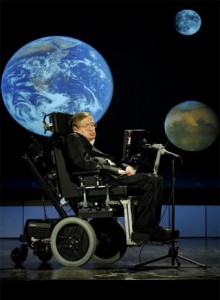 16 thoughts on “Stephen Hawking Says That God Did Not Create The Universe, But Who or What Did…?”