The Dark Side of the Moon: Why Do We Never See It? Is it Really Dark? 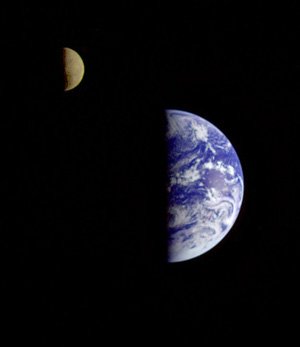 The image of the spacehip landing in the eye of the man in the moon, from the 1902 revolutionary film Le Voyage dans La Lune, is one familiar to most of us. But why is it that all man has ever seen of the Moon, until space travel,  was the one familiar face? Why is there a dark side of the Moon that can never be seen from Earth?

In a new study, a research team led by Oded Aharonson, professor of planetary science at the California Institute of Technology in Pasadena, has shed further light on the phenomenon of the Moon’s dark side, and it is likely that we now have the fullest scientific answer we can ever expect to get. 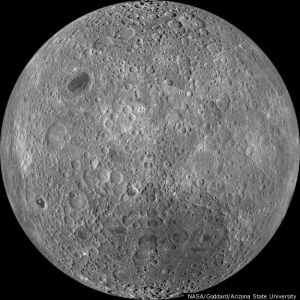 The Dark Side of the Moon- invisible from earth

As the Moon revolves around our planet, the familiar illusion of a human face etched onto the lunar surface — the so-called “Man in the Moon” — constantly faces the Earth. It has been the subject of many myths and legends, and at one point it was even thought that the Moon did revolve, but the “features” re-arranged themselves to look the same as always!

The new study examines why the Moon’s familiar “face,” and not its crater-covered far or dark side, gazes down at us.

The Moon orbits Earth in what scientists call a synchronous orbit, which means it rotates exactly once every time it circles the planet. How and why the Moon adopted this orbit has been something of a mystery. The research found that our Moon actually turned on its axis faster early in its history, and the rate that the moon slowed before it became locked in its current synchronous orbit that presents the side that now faces Earth.

The moon’s near side (left) is covered with dark splotches of lunar maria that look like a man’s face when seen from Earth. The moon’s far side (right), with its many craters and elevated topography, looks quite different.
While the moon looks like a perfect sphere it is actually elongated, almost like a football. The Moon formed a little over 4 billion years ago, and while it was still largely molten, it became stretched by Earth’s gravity, the researchers explained. As the moon cooled, it kept this slightly stretched, oblong shape.

But, a couple billion years ago, the Moon rotated on its axis more rapidly, the researchers said. During this time, people on Earth (if any existed at that time) would have seen all the different sides of the Moon at various times. There would have been no dark side of the moon. Over time, the earth’s own gravity slowed the Moon’s rotation, and harmonised it with our own.

If the Moon didn’t spin at all, then eventually it would show its far side to the Earth while moving around our planet in orbit. However, since the rotational period is exactly the same as the orbital period, the same portion of the Moon’s sphere is always facing the Earth. In other words relative to the Earth, the Moon makes one rotation every 29.5 days.

Finally, the reason that the far side of the Moon is frequently referred to as the “dark side” is because many people mistakenly think that it never sees any light from the sun. This notion results from a misinterpretation of the fact that it is never illuminated so that it can be observed from Earth. In fact, since the Moon is constantly rotating on its own axis, there is no area of the planetoid which is in permanent darkness, and the far side of the Moon is only completely devoid of sunlight during a Full Moon – when the Sun is facing the Moon with the Earth in between. 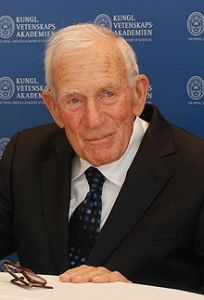 Walter Heinrich Munk (born October 19, 1917) is an American physical Oceanographer who was the first person to give a deatiled explanation of the effect of Earth’s gravity on the moon. Something he called “tidal locking”.