The Life Of Christian Rosenkreutz

Christian Rosenkreutz is the founder of the Rosicrucian movement; an esoteric order that has its origins in medieval times, but has many followers and devotees today. The name means Christian RoseCross.
Did he really exist, or is his existence allegorical? Is the name a pseudonym for someone else? This article looks briefly at some legends and theories as to his life.
According to an oral tradition, captured by Maurice Magre in his book Magicians, Seers and Mystics, Christian Rosenkreutz was the last descendant of the Germelshausen, a German family which flourished in the 13th century. Their Castle stood in the Thuringian Forest
Looking across the Thuringian Forest on the Border of Hesse. 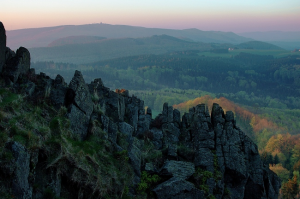 The family embraced Albigensian/Cathar doctrines. Catharism (from the Greek word meaning pure) was the name given to a Christian religious sect with dualistic and gnostic elements that appeared in the Languedoc region of France and other parts of Europe in the 11th century and flourished in the 12 th and 13th centuries.
The whole family was put to death by Konrad von Marburg for their Catharic beliefs, except for the youngest son, who was only five years old. Konrad von Marburg was a medieval German inquisitor. He was commissioned by the Pope to combat all forms of heresy. He was carried away secretly by a monk who was an Albigensian adept from Languedoc. The young Christian Rosenkreutz was placed in a monastery, where he was educated and made the acquaintance of four other brothers who were later to be associated with him in the founding of the Rosicrucian Brotherhood. 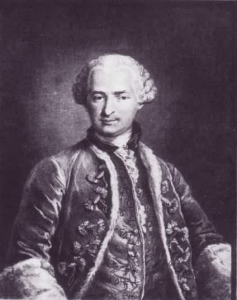 Other scholars of the Rosicrucian movement and its origins have stated that Rosenkreutz later reappeared as the Count of St Germain, a courtier, adventurer, and alchemist who reportedly died on February 27, 1784 (portrait above).

One occultist even claimed that Rembrandt’s famous painting “‘A Man in Armour'” (below) was a portrait of Christian Rosenkreutz! 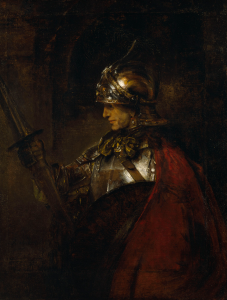 Others believe Rosenkreutz to be a pseudonym for a more famous historical figure, Francis Bacon the 1st Viscount of St Albans (22 January 1561 – 9 April 1626). Bacon was an English philosopher, statesman, scientist, lawyer, jurist, author and pioneer of the scientific method. He served both as Attorney General and Lord Chancellor of England until his political career ended in disgrace.
Continuing the legend, Christian Rosenkreuz discovered and learned esoteric wisdom on a pilgrimage to the Middle East among Turkish, Arab, and Persian sages, possibly Sufi or Zoroastrian masters, supposedly in the early 15th century. He was 15 and accompanied by a fellow brother who did not survive the journey. He then returned and founded the “Fraternity of the Rose Cross” with himself (Frater C.R.C.) as Head of the Order. Under his direction a Temple, called Sanctus Spiritus, or “The House of the Holy Spirit”, was built.
Turning to publications, the first anonymous public document on the Rosicrucian Order is the Fama Fraternitatis Rosae Crucis which appeared in 1614 in Kassel (Germany), introducing the pilgrim founder “Frater C.R.C” – a leader of the movement, followed in 1615 by the Confessio Fraternitatis. In 1616 appears the Chymical Wedding of Christian Rosenkreutz in Strasbourg the first time the Rosicrucian’s founder is named as Christian Rosenkreutz. These books are the main, and possibly only, source of information/legend about Christian Rosenkreutz that exist. 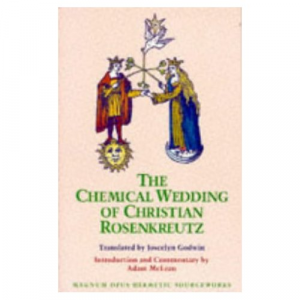 There is little information, even in legend, of his later life and death. It is described that his body was discovered in a sarcophagus by a Brother of the Order, in a perfect state of preservation, 120 years after his death in 1604, in a chamber Christian had created as a storehouse of knowledge.
It is fascinating to think that from such apparent flimsy evidence as whether Christian Rosenkreutz ever existed, the Rosicrucian movement that he founded not only survived, but flourished through to the present day. Whether real or not, the teachings and the spirit, of the Rosicrucian movement, lives on!

2 thoughts on “The Life Of Christian Rosenkreutz”