The Raspberry Pi: The Future of Computer Programming for Kids?

The Raspberry Pi computer is just a small green circuit board about the size of a credit card – but it is hoped that it will get thousands of schoolchildren interested in programming as well as playing games. 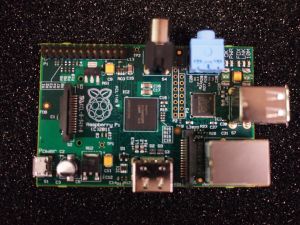 Created by a group of scientists and developers who wanted to improve the state of Britain’s computer science curriculum, the device contains a processor similar to the one used in many smart phones, a memory chip, an Ethernet port to connect to the internet and a couple of USB ports.

After plugging in a keyboard, mouse and screen, children are able to use the Raspberry Pi’s open-source software to write their own code.

The idea formed in 2006 when a team at the University of Cambridge’s Computer Laboratory became concerned about the year-on-year decline in the numbers and skills levels of the A Level students applying to read Computer Science in each academic year. From a situation in the 1990s where most of the kids applying were coming to interview as experienced amateur programmers, things were now very different; a typical applicant might only have done a little web design.

Something had changed the way kids were interacting with computers. A number of problems were identified: the colonisation of the ICT curriculum with lessons on using Word and Excel, or writing webpages; the end of the dot-com boom; and the rise of the home PC and games console to replace the Amigas, BBC Micros, Spectrum ZX and Commodore 64 machines that people of an earlier generation learned to program on. 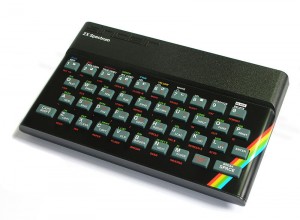 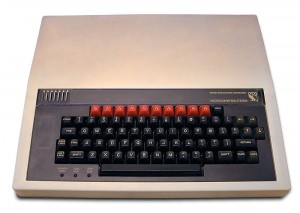 They thought that there must be something they could do- at least about the situation where computers had become so expensive and arcane that programming experimentation on them had to be forbidden by parents lest they foul things up for the whole family and have to call an expert out.  The aim was to find a platform that, like those old home computers, could boot into a programming environment.

Just five years from that first idea, the Raspberry Pi is going into production big-time through licensed manufacture deals with Elenment 14/Premier Farnell and RS Electronics.

The inventors say that they have had enormous interest, support and help from the educational community. Developing countries are interested in the Raspberry Pi as productivity devices in areas that simply can’t afford the power and hardware needed to run a traditional desktop PC; hospitals and museums have contacted the inventors to find out about using the Raspberry Pi to drive display devices. Parents of severely disabled kids have talked about monitoring and accessibility applications. 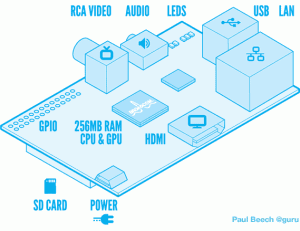 The firm say they don’t claim to have all the answers. They don’t think that the Raspberry Pi is a fix to all of the world’s computing issues; but their vision is for owning a truly personal computer to be normal for children.

The first batch of 10,000 boards is being manufactured in Taiwan and China rather than in the UK. This is in part because import duty in the UK is payable on individual components but not on finished products. Chinese manufacturers also quoted a period of four weeks for manufacture, compared to 12 weeks in the UK.

Initial sales commenced 29 February 2012 at 06:00 UTC; that date, it was announced that the Model A, originally to have had 128 MB of RAM, will be increased to 256 MB before release.  The two licensed stores selling them within the United Kingdom, Premier Farnell and RS Components, had their websites stalled by heavy web traffic immediately after the launch.  Although as yet unconfirmed, reports suggest that there are over 2 million expressions of interest or pre-orders The official Raspberry Pi Twitter account reported that Premier Farnell sold out within a few minutes of the initial launch, while RS Components will ship to the UK only. Manufacturers were reported in March 2012 to be taking a “healthy number” of pre-orders.

It will cost £22 excluding VAT, with the first 10,000 on release having been funded largely out of the pockets of the scientists behind the charitable Raspberry Pi Foundation.

Will this phenomenal bubble burst, or will it go from strength to strength as kids swap programmes, web-sites are set up, and applications added? 2012 is likely to be one hell of a year for Raspberry Pi!