The Weight of the Soul 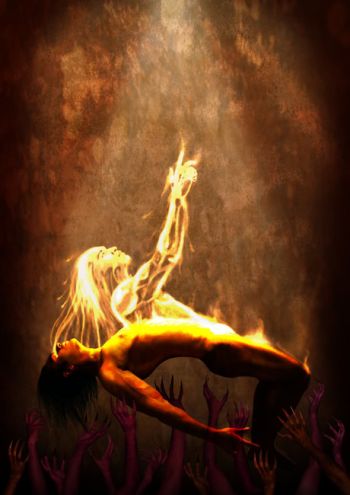 Most people will know of the experiments conducted by  Dr. Duncan McDougall in the early 1900s which led to the theory that the human body weighed 21 grams less at the moment of death.  McDougall weighed six patients, while they were in the process of dying from tuberculosis. When death was imminent, the entire bed of the patient was quickly placed on a highly sensitive industrial sized scale. In each case a small weight loss- about 21 grams- was recorded.  A paper summarising his findings appeared in the journal American Medicine in 1907.  He did the same experiment with dogs (which were easier to procure for his experiments than humans) and said that there was no weight loss at the point of the canines’ demise. This appeared to confirm the popular theory that, unlike humans, animals had no souls to fly heavenward at death. 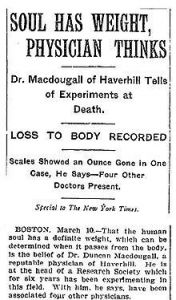 The Greek philosopher, Heraclitus, who lived in the sixth century BC, thought that the soul was composed of an unusually fine or rare kind of matter, such as air or fire. However it is not known whether he conducted any experiments.

More recently, in 1988, East German researchers carried out experiments on 200 terminally ill patients. In each case the weight loss was exactly the same – 1/3,000th of an ounce or 0.01 gram.  Considerably less than 21 grams.

No further valid experimentation and measurement has been undertaken in the last three decades, and while the minute weight loss has not been scientifically explained, various theories have been assembled to explain the change in weight from life to death.   Some try to say that the margin for error in the calculations was larger than stated and therefore the results are questionable, while others have used the experiments to argue in support of  the theory that  “dark matter” being part of the make up of all living humans.