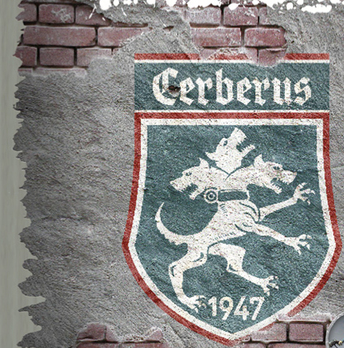 The year is 1947. The conflict is now totally global. From Antartactica to the jungles of the Congo. The three major superpowers, Axis, Allies and the Soviets continue the fight. And technology has developed further. A new ore has been found capable of lifting tanks from tracks onto two legs in the form of armoured mechanical biped. And a serum has been developed that can give soldiers awesome physical and mental powers, and revive them when they die… but at a terrible cost. Meanwhile at Roswell, alien technology is being coaxed to life.

Enough of the alternate history, for this is just a setting to whet the appetite of miniature gamers and get them sucked into the world that is Dust Tactics: 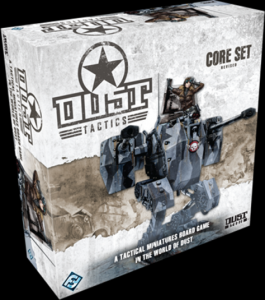 Dust Tactics is a new tactical miniatures board game for 2-4 players. In an alternate 1940s reality, alien technology fuels gigantic machines of war as the forces of the Axis and Allies clash over rare mineral deposits that could inevitably decide the outcome of the war. The core set comes with highly detailed miniatures, double-sided terrain boards, dice, unit cards, terrain, and plastic scenery. Oh yes, and Rules.  This isn’t toy soldiers that you kicked around on the carpet when you were a kid, there are lessons to be learned here, tactics to be employed, and hopefully you’ll spend an evening kicking your friends’ butts and ensuring your squads are triumphant. 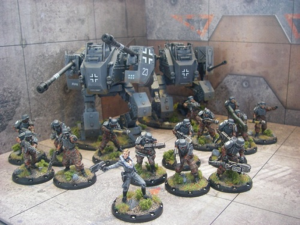 But of course the crafty manufacturers don’t just present you with the core game, and leave you to it. For those (and there are a lot) that have become immersed and addicted to Dust Tactics, there are regular expansions. These feed not only the desire for replayability and variety, but further stretch the tale of the “extra” years of World War 2. 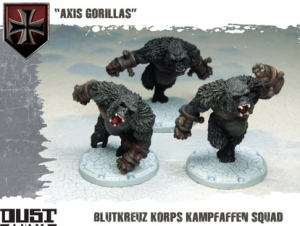 For example Operation SeeLöwe (the invasion of Britain), becomes a reality. Throw in Zombies, and intelligent trained Gorillas and you have an unusual mix of fantasy, horror and war.

The ideas behind the game are quite innovative, and the sculptures are well done. But at the end of the day, leaving the theme and chrome aside, this is a game, a miniatures war game, and as such is likely to only appeal to young boys, and young boys who have never grown up.

As for the setting; no-one seems to have mentioned the atomic bomb being invented two years earlier than the events portrayed in the background to the game! 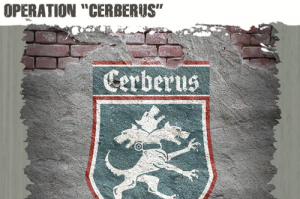