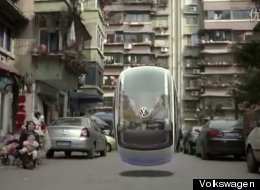 Have you seen the video of the the Volkswagen hover car yet? It’s creating a lot of attention- so catch it below. It is a product of the “People’s Car Project” (PCP) in China, which called upon potential customers to contribute design ideas for Volkswagen’s model of the future. But let’s take a little jaunt back into history.

Man began a journey when he invented the wheel back in ancient times. That journey took us through hand-carts, horse-drawn chariots,  the steam-train, the internal combustion engine, the Model T Ford, and the invention of the small modern family car just before nthe outbreak of the second world war; the Volkswaken (People’s  Car): 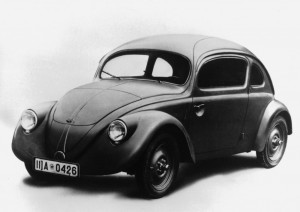 After the war, the world’s first hovercraft began to see service as both commercial and private means of transport, and hover technology saw the humble lawnmower rival the electric and pertol cylinder mowers in the gardens of Britain (despite  advertisements by traditional lawnmower manufacturers such as Qualcast “It’s a lot less bover than a hover”). 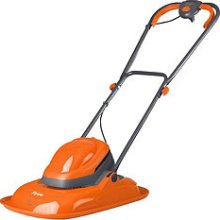 Where would things go next in the world of hover mobility? Is it possible we could develop a hover car like Luke Skywalker’s in the first Star Wars movie; the Landspeeder: 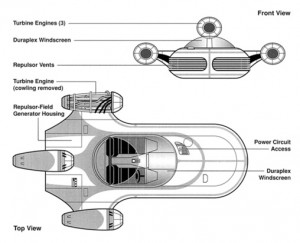 Well, the wait is over, sort of. A Volkswagen personal transport device that hovers a few feet over the ground, was unnveiled at the Beijing motor show this week.

“The ‘People’s Car Project’ in China marks the beginning of a new era in automobile design”, Luca de Meo, Director of Marketing, Volkswagen Group said. “We are no longer just building cars for, but also with customers and at the same time initiating a national dialogue which gives us a deep insight into the design preferences, needs and requirements of Chinese customers.”

From the initial 119,000 ideas put forward, Volkswagen picked three of its favorites. It developed concept cars around the ideas and is displayed them at the Beijing Motor Show.

The Hover Car is the concept that catches most attention. Volkswagen defines the car as an all-electric two-seat city car that hovers just above the ground and travels along electromagnetic roadways.

“The creative ideas from the ‘People’s Car Project’ give us a valuable insight into the wishes of Chinese drivers,” Simon Loasby, Head of Design at Volkswagen Group China, said. “The trend is towards safe cars that can easily navigate overcrowded roads and have a personal, emotional and exciting design.”

Thanks to the strong response, Volkswagen is extending the People’s Car Project. Originally scheduled for a one-year run, Volkswagen says that it will now sponsor the program indefinitely. It also plans to increase the scope of the project. In the past, it has also said that it might extend the programme beyond China into other markets.

As far as actual production models, PCP may give Volkswagen some inspiration and ideas, but they doesn’t plan to leave all details to the public. It will only proceed with projects that are in line with corporate objectives, and it will obviously have the ultimate say as to the final details.

“In a long-term context, the findings of the ‘People‘s Car Project’ will influence Volkswagen’s product strategy,” de Meo said. “The design of our models will, however, continue to reflect the tradition of the Volkswagen brand. If at some time in the future we are to produce a vehicle from the ‘People’s Car Project‘, it will be a combination of customers’ opinions and brand tradition.”

The video here is in Chinese, but it does provide the best look at the drum-like Hover car concept.  Hover car video

The hovercraft, as seen in the concept video above, uses electromagnetic levitation  to float along its own grid above the regular road network; distance sensors keep the craft from colliding with other vehicles. The disc-shaped pod seats two people and is controlled by a joystick that offers potentially amazing maneuverability. The car can move both back-and-forth and side-to-side and can even spin on an axis.  Oh, and did we mention that the concept car produces zero emissions? It’s a sort of covered hovering segway, crossed with a bubble car and a yo-yo,

Along with the hover car concept, Volkswagen presented two other ideas at the 2012 Beijing Auto Show. Though the hover car is by far the coolest, the music car, which causes the exterior color of the car to change with the driver’s choice of music, is a close second. Volkswagen also debuted an advanced touchscreen smart key that features information about key vehicle functions.

I actually think one of Volkswagen’s other designs for a hover car looks a lot cooler- but is  probably a lot more imprcatical in the crowded street of Beijing! 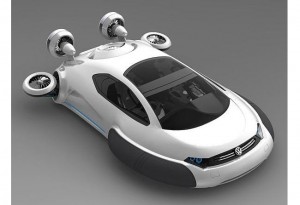