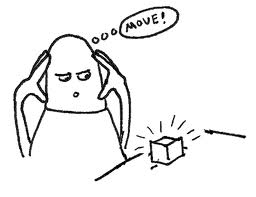 Ever since the film Carrie, Telekinesis has had a bit of an image problem, but there’s no doubting that there is massive potential for the power of the mind over matter. But with so many illusionists, conjurers, charlatans, publicists, self-seekers and con-men around, it’s difficult to sort out just who has the gift, and who is a faker.  But I’m getting a head of myself- let’s get back to basics- what is Telekinesis?

Telekinesis means movement of objects with mind power: It is achieved by projecting a portion of your consciousness in the object that you want to move.

What is clear is that very few people have the power of telekinesis straight off. however some people may be able to acquire the power. How? Practice and dedication. One technique that works for telekinesis is to concentrate on the object , consider the object an extension of yourself , a part of your being. When you have a sense that you are projected into the object then you can attempt a movement . As you and the object are now the same , see the object as your third hand and move it. It really is a matter of mind becoming melded with matter.

Here is an exercise you can try and repeat to see if you have the gift latent in your brain, and can train yourself to hone the ability:Fill a bowl with water then place a small drop of oil in it. Either machine/car oil or cooking oil will do. As the oil is lighter than water , the oil will float on the surface. Let the water settle and then try to move the oil with your mind , imagine that you are one with the oil then try to move it. Take your time, perhaps do a bit of yoga or meditation beforehand to clear your mind of any spurious thoughts. Try the exercise at the same time each day, every day. Be patient. Just think of the joy if or when you manage to shift that oil a little to the side! 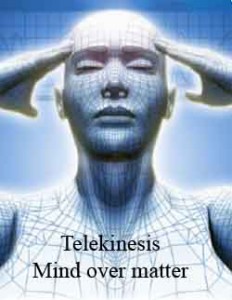 Some people believe that telekinesis isn’t a gift. They think that we all have the power in the cortex of our brain, but we have lost the ability to harness the power as we have come to rely on tools and artificial power such as electricity, fossil fuels, etc. These people say that the only thing that holds you back, is not believing in yourself. The problem with this is that you have to know your limitations. You can’t fly and no amount of believeing you can is going to make you be lighter than air!

But to be able to move something very small with the power of the brain is something that many people say is achievable. Try the oil and water test.  Good luck!

One thought on “Are You Telekinetic?”