Does the Necronomicon Exist?

The Necronomicon. Also known as Kitab al-Azif.  The fabled and feared book written in the 8th century by Abdul Al-Hazred, the so called “Mad Arab”  . And the basis of much of New England 1920s and 1930s horror writer H.P. Lovecraft’s Cthulhu Mythos, that fans and cult members debate today. 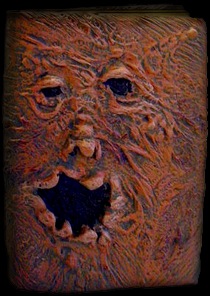 What is it?  Lovecroft wrote of the fictional Necronomicon, a book written on human skin, that when gazed upon drove people insane. Interestingly it may have had some basis in antiquity.  Lovecroft and Alister Crowley knew each other and corresponded on the matter of the source of the writings in the Necronomicon.  Liber Loagaeth by Dr John Dee (an Alchemist) was said to have been written from some of its passages, indicating that a version of it may have existed at some time, even though it may have been a copy. However, here is an interesting question, if the Necronomicon never existed then why did Pope Gregory the 3rd ban it as a work of heracy? Fact. Perhaps he knew something we don’t.

It is also said that its true name is the Sepher ha-Sha’are ha-Daath, also called the Book of the Gates of Knowledge. It always come with a warning- never to speak of its existence of the knowledge that can be acquired from its reading.

The Voynich is another text connected to the book. It  was first connected to the Necronomicon in Colin Wilson’s short story, Return of the Lloigor, written in the style of Lovecraft. In short, the Voynich is an encoded text accompanied by botanical illustrations and pictures of nudes, all scribbled in some unknown alphabet by an unknown author, perhaps the unseen Abdul Al-Hazred? Is it a herbalist cook-book, or a grimoire for magick potions and spells?

Bizarrely, no-one knows what it is about, apart from the author  because no one has come up with a definitive crack of the cipher. That assumes it is a cipher and not just random scrawling.

It is clear that adepts of the Cthulhu Mythos are doing their best to prove the books existence- or perhaps just spreading some fun: Listings for the book have even been cleverly added to the card catalogues of the Widener Library at Harvard and the university library of Tromsø, Norway, among other places, though typically with the notation to “inquire at the front desk” as to its whereabouts., sometimes with a warning against actually reading the book- even if it can be found!

On the internet you will find writings of Abdul Al-Hazred as follows:

For this is the Book of the Dead, the Book of the Black Earth, that I have writ down at the peril of my life, exactly as I received it, on the planes of the IGIGI, the cruel celestial spirits from beyond the Wanderers of the Wastes.

“Let all who read this book be warned thereby that the habitation of men are seen and surveyed by that Ancient Race of gods and demons from a time before time, and that they seek revenge for that forgotten battle that took place somewhere in the Cosmos and rent the Worlds in the days before the creation of Man, when the Elder Gods walked the Spaces, the race of MARDUK, as he is known to the Chaldeans, and of ENKI our MASTER, the Lord of Magicians.” 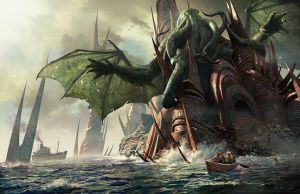 But authenticity is hard to obtain. There is also the later writings of H.P. Lovecraft, where the Necronomicon seemed to morph into a handbook for raising the Great Old Ones- the gods who rules the earth before the rise of man and who lie sleeping beneath the mountains (Cthulhu) or at the bottom of the sea (Dagon) waiting for invocations to rouse them from their slumber. This is the Cult of Cthulhu that has spawned many a board game, computer game, films, and speculations. There is indeed a Cult of Cthulhu today, but seems more a collection of fans of  Lovecraft that acolytes seeking the book with which to raise the Great Old Ones.

Did Abdul Al-Hazred exist? One translation of the words Abd Al Hasared is The Worshipper of the Great Devourer. But there seems no trace of the man.

I leave you with the chant to wake Cthulhu from his sleep… please use it with discretion:

(Translation: “In his house at R’lyeh dead Cthulhu waits dreaming”)

Utter at your peril! 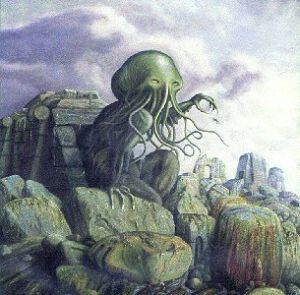