The Secret of a Long Life- Bexhill-on-Sea! 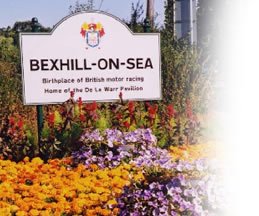 Bexhill-on-Sea is a south coast resort in England, adjacent to Hastings and Eastbourne. It is rather special. People there live longer than anywhere else in the United Kingdom! The estate agents don’t mention this in their blurb about the resort, but say:

“If you’re thinking of moving to the seaside and are wondering where would be the ideal place, look no further. Bexhill-on-Sea was voted the third best seaside town to live in a 2007 national survey. Bexhill is a quiet and relaxing town that has an elegance all of it’s own – a great place to live – a great place to visit.” 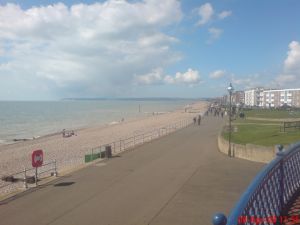 According to a breakdown of returns from the last census undertaken in England and Wales, there are 66 people over the age of 100 in the borough of Rother, which centres on Bexhill. A further 1,722 residents are in their 90s, with almost 7,000 in their 80s out of a total population of 90,600.  Here is the list of the top three places based on the number of centenarians-

What’s astounding is that these three places are all adjacent to one another, all on a particular stretch of Sussex’s south coast. So what is it that makes people live longer here? Two factors have been put forward; the sea air, with its healthy dose of ozone, and the fact that in a recent survey it was found that Bexhill enjoys an extra four hours of sunshine per week than the average for seaside towns.  This isn’t just a one-off fluke. For the last two centuries, according to censuses and surveys, people have been living longer in Bexhill. 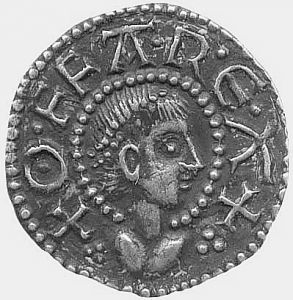 The first reference to Bexhill, or Bexelei as it was originally called, was in a royal charter granted by King Offa of Mercia in 772AD (see his image on the coin above) . It is recorded that King Offa, infamous for Offa’s Dyke, had ‘defeated the men of Hastings’ in 771AD. At this time, the term Hastings would have referred to this whole area along the coast, including what is modern Bexhill and Eastbourne. In the charter, King Offa established a church and religious community in Bexhill.

A print hanging in the town’s museum, shown below,  commemorates a special dinner in 1819 attended by 25 gentlemen in their eighties – a unusual feat at the time, with 15 in their 70s waiting at the tables! 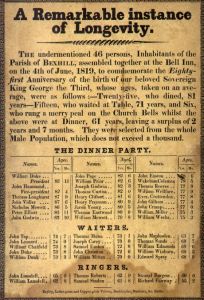 Note the title- “A Remarkable example of Longevity”. Even before Victorian times, Bexhill was known for its health properties and many sons of diplomats and parliamentarians sent their children to boarding schools there. Many of the locals today are relatives of those early Bexhillians.  There is a standard joke in Bexhill that it’s the place people retire to and then forget to die! 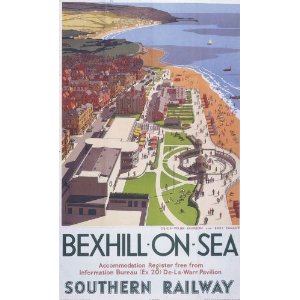 There seems to be no scientific evidence as to whether a combination of sunshine and sea air can stave off the grim reaper, but it’s well known that happy and content people live longer, so maybe it’s just that? Whatever the reason, the facts cannot lie, and I’m booking my retirement flat there now!