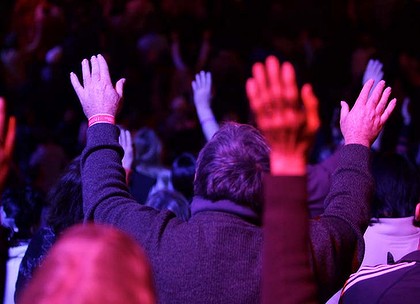 Glossolalia, more commonly known as “speaking in tongues” is the phenomenon of speaking in unintelligible utterances (often as part of religious practices). Sceptics say that it’s all gobbledygook and the utterances have no meaning or significance apart from trying to con the unwary, or in a case I witnessed,  it was a cry for help. The woman concerned was having a fit in the back pew of the Charismatic  Church I then attended and her urgent utterings and mutterings and  loss of physical coordination was mistaken for speaking in tongues. Thankfully there was a doctor in the house, and she was taken to hospital.

While the gift of speaking in tongues is evident in other religions and cults (even if it is not so described) it is most prolific in Christianity and the Pentecostal Church in particular. “Speaking in Tongues” is mentioned in the Bible as a supernatural gift of the Holy Spirit (Corinthians). The name Glossolalia is Greek for “languages” and “to speak”.  Speaking in Tongues is mentioned in no fewer than 15 times in the Bible, and its meaning seems to fluctuate between the phenomenon being a supernatural and unbidden outpouring to shock unbelievers, a tongue for strengthening the Christian church which required interpretation by a priest, or simply a private languge for prayer, not to be shared. 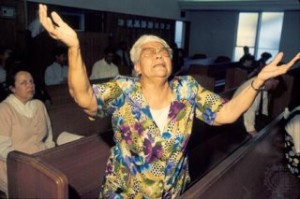 People speaking in tongues has been recorded and analysed by linguists. It seems that the majority of word forms spoken are open (they end with a vowel). That’s interesting in that words of most known languages end with a consonant as opposed to a vowel. The conclusion was that there seemed no metre, rhyme, meaning, consistency or sense in the sounds spoken, and therefore it could not be classified as a language.

As to why some people are more prone to these verbal outbursts, and why the vast majority are Christians, has not been explained. People who have spoken in tongues commonly have no recollection of the event or the words/sounds they ejaculated. It may be that some religious or emotional fervour grips these people and becomes so intense that it must be released in some way or form.

This man claims he is  Speaking in Tongues

Sounds like straight out of the Lost Symbol. The Collective Counscious measured by searches and crawles.

The Web Bot is claimed to have predicted several events prior to them occurring, most notably the September 11 attacks and the 2003 Northeastern United States blackout. However, many believe the predictions are vague and, at best, pseudoscientific.

Some of its predictions:

Major catastrophe in 2012 – The Web Bot has gained most of its notoriety for contributing to the 2012 phenomenon by predicting that a cataclysm will devastate the planet in the year 2012, possibly a reversing of Earth’s magnetic poles or a small series of nuclear attacks leading up to a major attack on this day. The prediction does not necessarily call for a complete end of the world.

This noetic science experiment is based on the intention-manifestation model of reality, where the goal is to generate $1 million of additional wealth for each person who chooses to participate.

The Million Dollar Experiment is open for everyone to join.(At the moment they don’t seem to accept any new participants)

The New Wealth Experience is an international virtual conference the month of October 2009 featuring the world top thought leaders.  Their purpose is to awaken millions to connect with the direction of a higher purpose and conscious creation. Check out the Global Kindness Project .

The study: With support from the Templeton Foundation, cardiologist Herbert Benson and his colleagues randomly assigned 1802 cardiac bypass patients to one of three conditions:

Why prayer experiments of that scale do not work:

Given that 95 percent of Americans express belief in God, all patients undergoing cardiac bypass surgery will already be receiving prayer—by spouses, children, siblings, friends, colleagues, and fellow believers and/or congregants, if not by themselves. Are these fervent prayers a mere “noise factor” above which the signal of additional prayers may rouse God? Does God follow a dose-response curve—more prayers, more response? Does God count votes? Are the pleading, earnest prayers of patients and those who love them not sufficiently persuasive (if God needs to be informed or persuaded of our needs)? Are the distant prayers of strangers participating in an experiment also needed?

Are we all connected on a quantum level? Test the theory yourself using the instructions by Song Chengxiang!

Take part in the Affirmation Experiment

The Unified Field Theory and The Philadelphia Experiment

Dating back to the early years of WW2, the US Government is alleged to have experimented with Einsteins Unified Field Theory.


Check out what Michio Kaku has to say about invisibility! Not very far from what we learned about the Unified Field Theory!