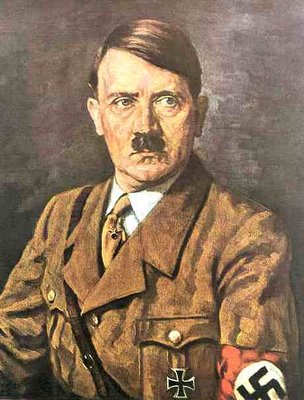 Incredibly, over 70 years since the Second World War, and while there have been countless other major conflicts,  we still seem to be obsessed with that war, the Swastika, and Adolf Hitler. The History TV channels seem to be sponsored by those who want to re-cycle WW2 footage and re-plough furrows in the same tired land of the Nazi Party, Hitler’s Generals, Genocide of the Jews, and Hitler’s association with the Occult.

So is there any truth to the rumours that Hitler was the anti-Christ? Spawn of Satan or just an amateur dabbler in mysticism and Nordic folklore?

Well, those who want to be convinced will be, and those who won’t will never be. Just like whether you believe the Bible to be a ripping good yarn or the Word of God… But here’s some “facts” to play with in your deliberations:

In 1904, when Hitler was 15 years of age, he was with a friend, August Kubizek, when suddenly, he grabbed Kubizek’s hands and held them extremely tight. It is said that his eyes turned feverish and he began to speak in a voice that was loud, hoarse, and raucous. Kubizek felt that some strange being had seized control of Adolf, and was inhabiting his body. Hitler began to speak eloquently about a Mandate to rule Germany.  Was Hitler speaking in tongues? No… his friend could understand him. Was he possessed?  Following this, the young Adolf  spent a lot of time in public libraries, reading about Ancient Rome, Eastern Religions, Yoga, Occultism, Hypnotism, and Astrology.  Hitler also became infatuated  with stories of Pan-Germanic mysticism, old Nordic legends, and of a people who substituted the Swastika for the Christian Cross, and who participated in Black Magic rituals involving sexual perversions.  It is about this point in Hitler’s life that people said that his eyes changes to a very pale light blue colour. Occultists say this is a sure sign of demonic possession. 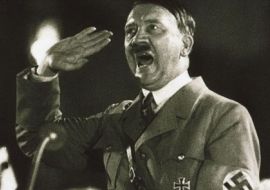 There are references to Hitler being a member of a 99 Lodge of satanists, and some of his confidants and associates were members of the Thule Order, led or rather subverted by a group of Tibetan black magicians. Hitler also said on one occasion:

“I will crush Christianity under my boot like a poisonous toad.”

Was he truly an instrument of darkness or just a mad and bad Austrian tramp who got lucky?  If you want to judge evil and satanism by death toll, then Stalin should have been the anti-Christ, by killing around 40 million of his own people. There have also been dictators since WW2 who have committed genocide, yet satanism doesn’t seem to attach to them.  One could argue that the Taliban, for all their claimed religious fanaticism, are under the control of a dark God. 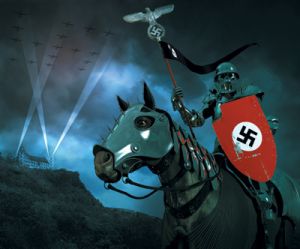 But returning to Hitler, you’ll have to make up your own minds. I just wonder whether 1939-45 was the true apocalypse. If it was, and the forces of light defeated Hitler as Satan, and his minions, then why is the world so full of bad stuff today? It was a pyrrhic victory…