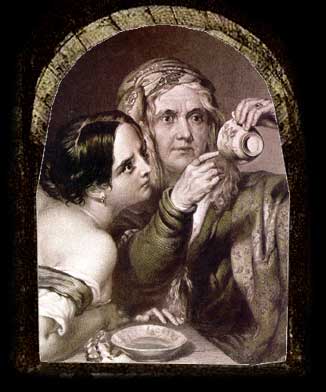 No, it’s not a place where you find tassles. Tasseography, also known as tasseomancy or tassology, is better known as the art of reading tea leaves.  My Aunt Lil used to do it for people in her street, and occasionally in the local pub, The Glengall Tavern, in Peckham, South East London. It surprised me because she was a devout Catholic, and i wouldn’t have thought that the Pope supported such esoteric arts!

The terms derive from the French word tasse (cup), which in turn derives from the Arabic tassa (cup), and the Greek suffixes -graph (to write), -logy (expression), ology (study of or science of), and -mancy (divination).  The art of reading teas leaves and predicting someone’s future is quite old, and has been practiced in many countries, almost exclusively by women.  With the advent of  the teas bag, it is much less common than it was, and some readers have switched to reading coffee dregs after that have been tipped out. Disappointingly Coffee reading is known as cafeomancy. What a boring word! 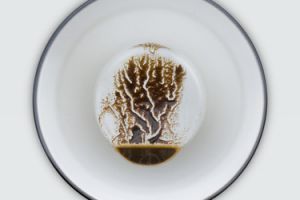 The early Greeks practiced a variation of tea leaf reading, using wine instead of tea. They called this technique “Kottovos.”  There was a lot of sediment in the bottom of red wines in those days. A Greek seeress would throw wine into a metal bowl and observe the shape of the sediment impact splash at the bottom of the bowl. From the image, future events would be forecast which could be interpreted as being good news, bad news, or unclear. The reading of wine sediment was a lot more convenient that going to Delphi, to consult the Delphic Oracle.

In the Middle East, it was more common to read coffee grounds. Professional coffee grounds readers are common throughout Asia even today. On a trip to a Turkish barbers, I not only had me hair cut, I had a shave, with hot towels, a massage, tea and pastries, my nose and ear hair trimmed, and was whipped with seaweed (supposed to give you better skin) before ending up with a free reading of my coffee sediment. The man said I would have good fortune… suitably vague!

The Europeans adopted tea leaf reading around the mid-1600’s,  and this may have been due to the influence of Romany gypsies. There was a gypsy on Brighton Pier a few months ago, who would do palm, tarot or tea leaf readings for you, so it seems that the art is still thriving in some parts of the UK. 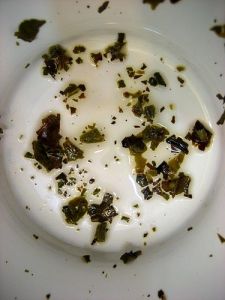 The way you have your fortune read with tea leaves is to drink the tea (made with loose tea, not tea bags!) leaving a small amount of liquid in the bottom of cup of the cup. Holding the cup in your left hand, swirl the tea leaves round three times in a clockwise direction.  Think hard about yourself and your life so far. Make sure that the remaining tea swirls around the whole of the cup. Then, up-end the cup on the saucer and let the liquid drain away. Present the resultant pattern to a tea leaf reader and await their news.

You can try to interpret the tea leaves yourself, but it seems that there are many explanations for different shapes. Most seem to boil down to you going on a journey, about to receive some good/bad news, or will soon have some good or ill luck. The extent to which it is accurate is, like astrology, down to the skill of the reader/interpreter, and the level of belief of the person whose fortune is being told.

Now if you’ll excuse me I’m about to go and pour myself a nice cup of Earl Grey!