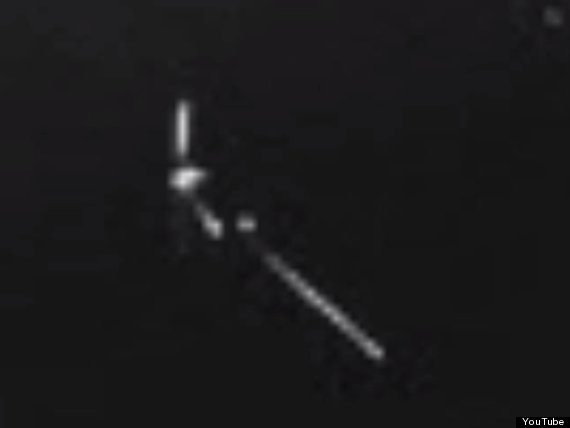 There’s much excitement and speculation following images recorded on 24 April from NASA’s Solar Heliospheric Observatory (SOHO).  A strange object flying close to the sun looks unnervingly like a huge, metallic ‘mothership’ familiar from Hollywood Sci-Fi blockbusters. The picture  has become an immediate cult hit on the internet, with both  excitable UFO watchers and cool-headed scientists alike, speculating as to what it represents. 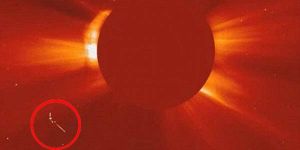 Still of SOHO video with the UFO ringed

UFO fan site Gather News said: ‘An unusually shaped, gigantic UFO was spotted on the Solar and Heliospheric Observatory (SOHO) and posted in a video on YouTube. The object apparently bears no similarity to any Nasa craft or satellites near that sun, and remarkably, it appears to be able to withstand the incomparable heat.

In the image it appears to have one short upright arm, and one longer arm extended at a 135 degree angle from a central body. While there is a lot of space junk around, that particular configuration matches no known man-made objects.

It is a true unidentified flying object, because it bears no resemblance to anything ever spotted near the Sun. Even if it might be some piece of old Russian sputnik or debris from one of the many abandoned satellites that can escape earth’s gravity, a burning question remains: Nothing that close to the sun should be able to withstand the metal-melting heat thrown off by solar flare activity and the incredibly high temperatures emanating from nuclear fusion generated on the surface of the star.


SOHO, the Solar & Heliospheric Observatory, is a satellite built to study the Sun from its deep core to the outer corona and the solar wind. It was launched in December 1995. The twelve instruments on board SOHO communicate with large radio dishes around the world which form NASA’s Deep Space Network are used for data downlink and commanding.

Some have poo-pood the video as just some dust on the lens, or a mistake in transmission, but experts have looked at the video closely and consider it genuine. Whatever it is or was, it was definitley there! Could it be one of these? 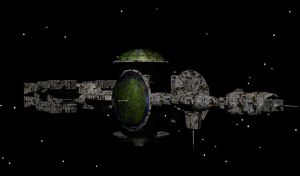 We await a detailed report from NASA as to what they consider the sighting to be.

One thought on “UFO Seen Near Sun”