What if the Meteorite Missed the Earth 65 Million Years Ago? A New Evolution 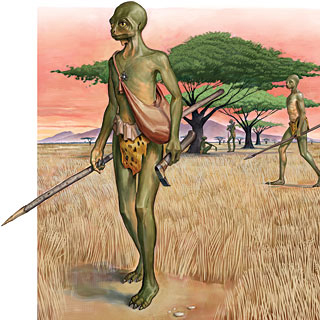 It’s fairly unanimously agreed that the dinosaurs ceased to exist 65 million years ago. Well, apart from turtles, some small lizards and crocodile-like reptiles. There is evidence that a huge amount of ash, smoke,  debris and other sun-blocking material were thrown up into the atmosphere and spread around the young earth, causing the temperature to plummet and with it, the fortunes of the dinosaurs who for so long had ruled the planet. There is also evidence that this was caused by a huge meteorite impacting in Siberia and throwing up the deadly sunscreen, rather than a wave of  linked volcanic activity. 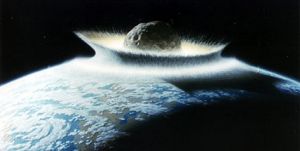 Bit if that meteorite had just been o.o1% wide of the mark it would have skimmed the earth’s atmosphere and the only thing the dinosaurs would have noticed would have been a bright sky for a 30 minutes, then back to normal: Herbivores munching the huge expanse of forest vegetation and the carnivores hunting them down. And then what?  Assuming that a second meteorite didn’t have the earth in its sights,  and that history would have been the same, albeit delayed by a million years or so, what path would evolution take? Would we still be here? What would have happened to the dinosaurs? 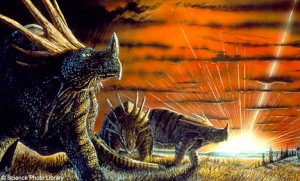 There are a number of schools of thought on this issue. The first is that dinosaurs would have dies out by other means, and that mammals would have taken over eventually without meteoritic intervention. Some scientist think that they were the equivalent of the evolutionary fins on cars in the 1950s- they grew to silly proportions, had no practical benefit and just fizzled out. Another theory says that they ate themselves to death and poisoned themselves and most of the plant in their own faeces. I kid you not. There number and size of late Jurassic era dinosaurs meant that not only did they eat up all the carboniferous forests that circled the earth, but they poo’s more quickly than the earth could re-cycle their dumping grounds. They literally shat themselves into extinction.

But my favourite, and one that the majority of scientists say is possible is that given a few more tens of millions of years, the dinosaurs would have evolved much larger brains.  Bigger brains means more intelligence. Given another 10 million years of evolution, then dinosaurs would have begun to shrink in size, and become more aware of their surroundings and began to develop  thought and consciousness. 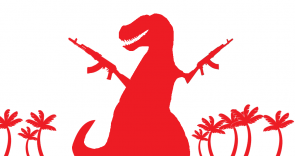 So next time you look at an alligator in the zoo, and see it eyeing you hungrily- just think what might have happened had that meteorite not struck the earth…