Will We be the New Dinosaurs on February 15th? 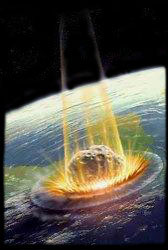 You may want to cancel your plans following that romantic Valentine’s Day dinner in a couple of weeks.

In the wake of the (thankfully false) predictions that the world would end on 21/12/12, comes a new one.

A meteorite named 2012 DA14 (catchy isn’t it? Why can’t we give them girls’ names like Cyclones?) is due to just miss the earth on 15 February. 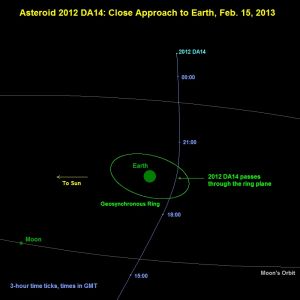 Scientists say it’s the size of a football pitch (not the shape of one; that would be just too bizarre!) and will miss Earth by a whisker. Or it may not. Some people have said that the margin for error in the calculations means that it will not just skim past, but plough into the planet surface with the power of a massive atomic bomb and cause another dark age, and the extinction of the dinosaurs again. Except that this time, we are the dinosaurs. 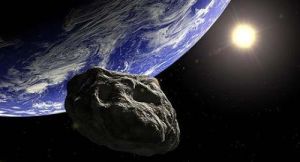 So close will the meteorite come, that it will pass inbetween the Earth and some commercial satellites. How safe do you feel? Get that slide rule out again and check.

Scientists also say that they are developing better ways of getting advanced warning of meteorites that will come close to or impact upon us. This would give us a three week warning. Great. Time to cancel the papers, pay off your credit card bill and bury your treasured belongings in a metal tube in the garden. Then have an end-of-the-world party. No danger of suffering a hangover the next day…